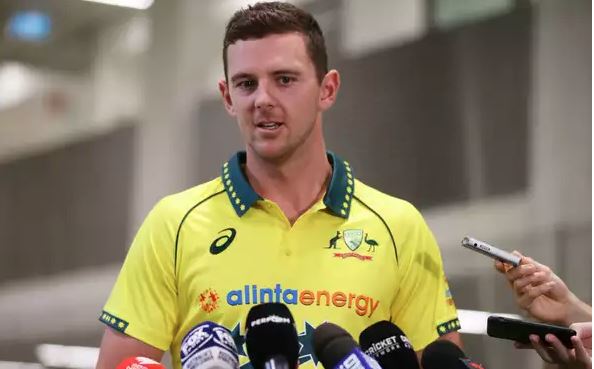 Australian pacer Josh Hazlewood has admitted that he is unlikely to get picked in the T20 squad for this year's home World Cup.

Hazlewood hasn't been a regular feature in white-ball cricket these days for Australia and has only recently been brought back into the ODI fold. In T20Is, his last appearance came in 2016 in the previous World Cup in India.

He did play a role in Sydney Sixers winning the BBL title this year but with Australia looking quite strong at the moment, Hazlewood conceded that it is practically not possible to force his way back in before the World Cup. "The team is settled now, and I may have missed the boat," Hazlewood told Cricket Australia ahead of the ODI series in South Africa.

"When the team's winning every series and pretty much every game, and particularly the bowlers are doing such a great job, it's going to be tough. It'll probably take an injury or two to get an opportunity. That's the realistic way of looking at it."

The right-arm pacer pointed out how much significance T20 cricket has gained over the years. Since he hadn't played the format for a while now, Hazlewood wanted to put himself in the mix before the World Cup to give himself an outside chance. "There were times when we were part of the Test team and watching Australia play a T20 on TV," he said. "I think when it's like that, T20s felt a little bit insignificant and it didn't quite feel like the Australian team was playing. But now it's a little bit different.

"The years of guys playing the Big Bash, those guys have been given the first opportunity, which is fair enough. They'd played the format for the last few years and I haven't played much at all. Being a T20 World Cup year, that's the reason why I went back in the Big Bash and put myself in the IPL auction, just to get some opportunities."

The fast bowler also admitted he's likely to miss the first couple of matches for Chennai Super Kings - who picked him up at the most recent player auctions - as he'd be part of the Sheffield Shield final which will be played at the same time.

For now, the immediate focus for Hazlewood is on getting his spot back in the 50-over side. Having been part of the victorious 2015 World Cup winning side, Hazlewood was ignored for the tournament in England last year. Even though he is now back in the ODI setup, Hazlewood isn't a guaranteed starter in the ODIs against South Africa and will potentially be battling Kane Richardson and Jhye Richardson for that third seamer's spot.