People in panic as embankment in Koyra stands threatened 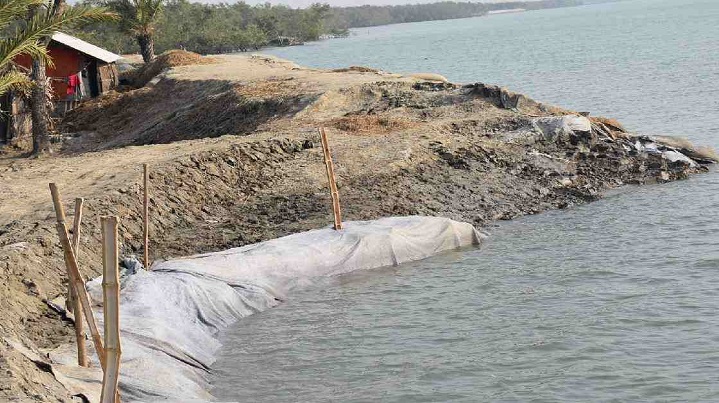 The residents of five unions in Koyra upazila of Khulna district are passing days amid fear as the vulnerable portion of the flood control embankment covering the area is on the verge of collapse due to unusual tidal surge right after the winter.

According to the villagers, a 21-km area of 154-km 13-14/1 and 13-14/2 No Polder of the Water Development Board's embankment in the disaster-prone upazila faces the risk of erosion.

They said tidal water could enter the villages of the coastal upazila any moment if the embankment collapses.

Local residents are passing days amid panic as risky portions of the embankment might collapse any time, he added.

If no repair work is done immediately, the areas will be inundated by flood water after the collapse of the embankment, he added.

Mosiul Abedin, deputy assistant engineer of WDB, said senior officials have been informed in this regard and the repair work will start soon.

Md Nur-e-Alam Sidiqui, acting upazila nirbahi officer of the upazila, it is urgent to build a sustainable embankment here as it is related to the lives of many people. Higher officials concerned have been informed, he added.

Md Akhteruzzaman Babu, MP from Khulna-6, said, “I met Prime Minister Sheikh Hasina to inform her about the sufferings of Koyra residents for the embankment. The Prime Minister assured me that the problem will be resolved soon. Already State Minister for Water Resources Ministry visited the areas. The ministry has also taken a project for building the embankment.”