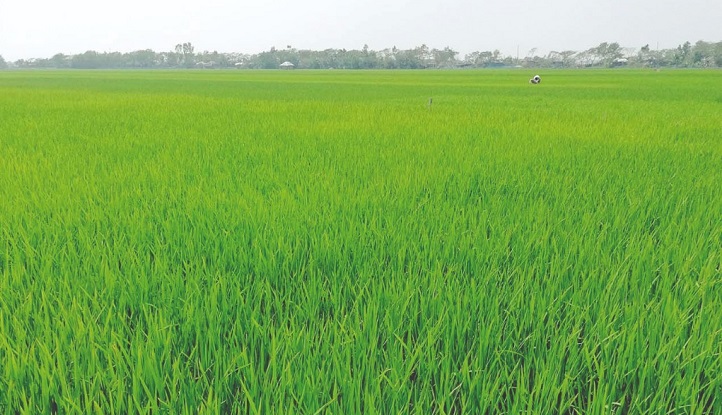 Farming of Boro paddy, a high productivity crop, has been progressing fast in all seven upazilas in the district since January during the current season amid much enthusiasm to the farmers.

Office sources said the Department of Agricultural Extension (DAE) has set a target to bring a total of 1, 30,200 hectares of land under the Boro cultivation this year with the production target of 5,35,000 tonnes of clean rice.

Now, the farmers are passing their busy times with transplanting the Boro seedlings after raising those from the seedbed with the hopes of getting desired output against the crop, said Mamtajur Rahman, a farmer of Barobaldia village under Sadar upazila.

To bring the land under Boro cultivation, the farmers have prepared seed beds on 7,500 hectares of low land where the seedlings have grown well.

To make the cultivation a grand success, necessary measures have been taken to supply fertilizers, insecticides, electricity and other agri inputs to the farmers at fair prices side by side ensuring with irrigation facility, said an official of the DAE.

Besides, the DAE is conducting training for the farmers in field level so that they could boost production of the crop, said District Training Officer of the DAE Showkat Osman.

Apart from this, the commercial and scheduled banks have taken initiatives to disburse loan to the farmers of the district on easy terms to help them cultivate the crop without economic troubles, said a bank official.

Talking to the BSS, Deputy Director (DD) here Krishibid Masudur Rahman said the farmers were advised to transplant the raised seedlings of the Boro paddy on their respective land as per the suggestions of the field level sub assistant agriculture officers.

In reply to a question, the DD said around 94 percent transplantation of seedlings of Boro farming had already been completed in the district and it would continue till March 15.