Asia Bibi: I always believed I would be freed 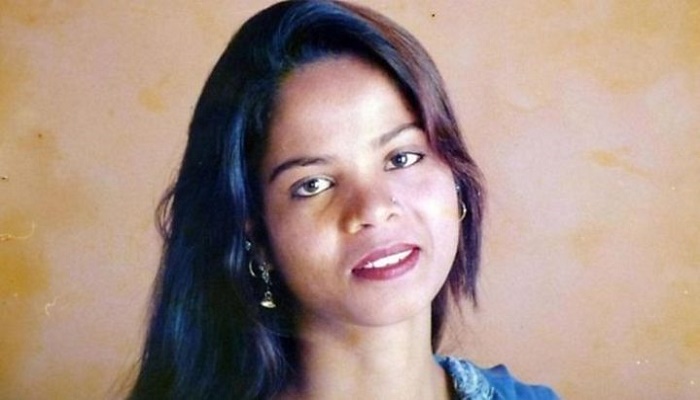 Asia Bibi, the Pakistani Christian woman who spent years on death row after being convicted of blasphemy, says she always believed she would be freed.

Now living in Canada, she told the BBC that she hoped she would be able to return to Pakistan one day.

In it, she recounts her time in jail and her brutal treatment by guards.

In one of the most disturbing incidents she recounts how she had her neck put in a brace that was tightened with a key, and was pulled about on a chain by guards.

Pakistani authorities have dismissed the allegations, saying her claims of torture were "not plausible".

Who is Asia Bibi?

A year later she became the first woman to be sentenced to death under Pakistan's blasphemy laws, causing an international outcry

The death sentence was quashed by the Supreme Court in 2018, triggering violent protests by religious hardliners

Ms Bibi spoke to the BBC during a visit to France where she is promoting her new book.

She recalled how, in 2009, a longstanding dispute with neighbours culminated in a group of local women accusing her of insulting the Prophet Muhammad.

"My husband was at work, my kids were in school, I had gone to pick fruit in the orchard," she said. "A mob came and dragged me away. They made fun of me, I was very helpless."

In her book, Ms Bibi tells how she feared for her life in prison, with other inmates calling for her to be hanged. She also recalled mistreatment at the hands of the prison guards.

"I can't breathe," she writes. "My neck is compressed by a neck brace that the guard can tighten as much as he wants with a big key. A long chain drags on the dirty floor; it links my throat to the guard's handcuffs that drags me like a dog."

Ms Bibi told the BBC that her Christian faith helped her through the ordeal.

"They said change your faith, and you'll be freed. But I said no. I will live my sentence. With my faith," she said.

"That made me feel that their prayers would definitely free me."

Ms Bibi called on Pakistan's Prime Minister Imran Khan to free anyone unjustly accused or convicted of blasphemy and to ensure that the charges are investigated properly.

"Innocents should not be punished for no reason and people who are innocent, in prison, should be freed," she said.

"During the investigation, both parties should be questioned properly because there are a lot of problems in our investigative procedures. And it is hard to tell who is on whose side."

Despite her ordeal, Ms Bibi said she still felt positively about Pakistan and hoped to return there one day.

"It was my country that freed me. That makes me proud," she said.

"I left of my own volition because I was in danger there. Anything could have happened to me at any point. So that's why I left my country. But I have the same love for my country in my heart now. I still respect my country and I want to see the day when I'm able to go back."

She also recalled her sorrow at hearing while in jail that two politicians who tried to help her - Shahbaz Bhatti and Salman Taseer - had been murdered.

"I cried a lot. I cried for more than a week for them. Even today, my heart is full of sadness for them and I miss them," she said.

But, she says she feels no bitterness to those who called for her to be killed.

"I'm not angry at all, I've forgiven everyone from my heart and there is no hardness in me, there is patience in me because I learned how to be patient after having to leave my children behind," she said.

Who are Pakistan's Christians?

The vast majority of those convicted of blasphemy in Pakistan are Muslims or members of the Ahmadi community who identify themselves as Muslims but are regarded as heretical by orthodox Islam.

Since the 1990s scores of Christians have also been convicted. They make up just 1.6% of the population.

The Christian community has been targeted in numerous attacks in recent years, leaving many feeling vulnerable to a climate of intolerance.

Data provided by the Centre for Social Justice (CSJ) shows a total of 720 Muslims, 516 Ahmedis, 238 Christians and 31 Hindus have been accused under various clauses of the blasphemy law from 1987 until 2017.

Pakistani authorities say blasphemy laws exist in many parts of the world and that all such cases in Pakistan are brought before the courts and follow due process.

Ms Bibi says in her book that the Christian community is despised and bullied and discriminated against.

But Pakistan says it attaches high importance to the protection of rights of minorities, which are guaranteed under its constitution.