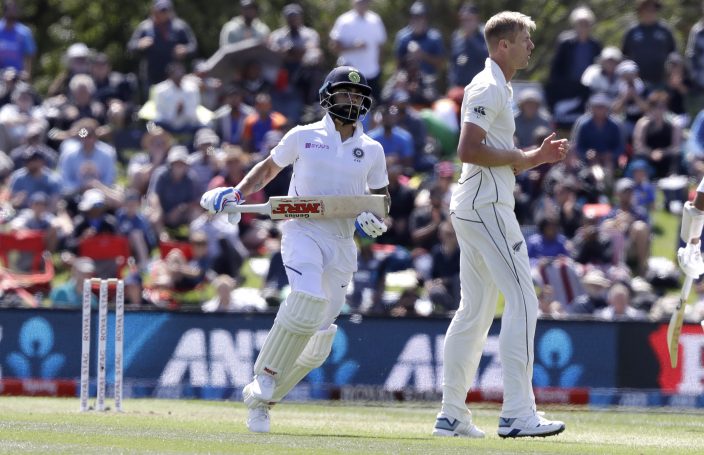 Prithvi Shaw made an aggressive half century as India overcame the loss of the toss to reach 85-2 at lunch Saturday on the first day of the second cricket test against New Zealand.

The start of the match was delayed by overnight rain and when the covers came off it was to reveal a pitch which was bright green and apparently ideal for seam bowling.

New Zealand leapt at the chance to bowl on winning the toss but the pitch at Hagley Oval didn't live up to its appearance. There was little seam movement and a softness which took the venom out of any bounce.

Shaw looked comfortable from the outset and scored freely on his way to the second half century in his four-test career.

He struggled in the first test, scoring 16 and 14 as India lost by 10 wickets. But he came closer to living up to his impressive reputation with a dominating innings Saturday which ended when he was out for 54 not long before lunch.

He signaled his intentions when he hit successive fours from the bowling of Tim Southee in the fifth over, the first in front of point and the second past Southee and through long on. In total he hit eight fours and the six which brought up his 50 from the bowling of Neil Wagner, which passed over the head of Kyle Jamieson on the fine leg boundary.

Shaw lost his opening partner Mayank Agarwal early in the day. Agarwal was seven when he was hit on the foot by a very full delivery from Trent Boult and was adjuged lbw. He reviewed the decision but his challenge was fruitless; the ball was hitting leg stump and India was 1-30.

Cheteshwar Pujara came to the crease and batted with the same patience, almost immobility which he showed in the first test. He had taken only 15 runs from 49 balls by lunch when Virat Kohil was 3 not out.

Shaw's 50 came from just 61 balls and he faced 64 balls in total, playing shots on both sides of the wicket but most often between point and cover.

He finally fell to Jamieson, who drew him forward with a shorter, wider ball. Shaw threw his hands at the ball and edged a flyer which was superbly caught by Tom Latham at second slip.