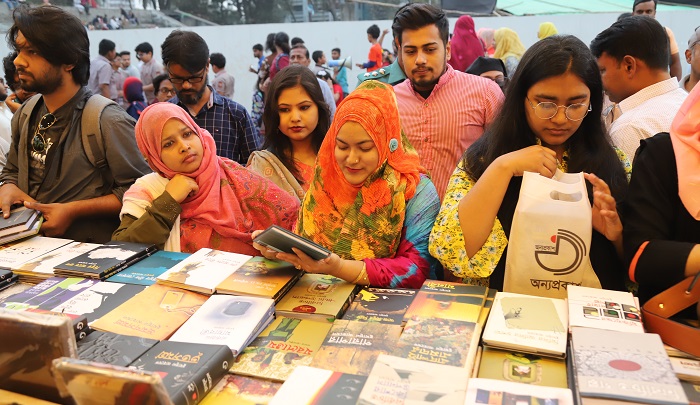 As the curtain is set to fall on the month-long traditional Amar Ekushey Book Fair on Saturday, all concerned, including sellers, publishers, readers and fairgoers, on Friday demanded that the book festival be extended by a few more days.

The fair also witnessed an unimaginable crowd on Friday as the book-lovers rushed to buy books of their choice and meet, greet and take autograph-photographs with their favourite authors at the last moment utilising the weekly holiday.

While the fairground on the Bangla Academy premises and at Suhrawardy Udyan seemed densely overpopulated with book-lovers coming from all the corners of the city, the sales of the publications also skyrocketed.

Friday marked the 27th day of the annual traditional fair which started on February 2 instead of the regular slot of February 1 due to the DNCC and DNSC elections.

Also, the combined celebrations of Pahela Falgun and Valentine’s Day on February 14 seemingly cost the sellers to get an extra profit-making day to which many sellers are not satisfied with.

“Although we got a tremendous number of crowds this year, the joint celebrations prevented an extra day of profit we usually got in previous years. As the fair also started a day later than its usual timing, we hoped that the authorities will consider the matter of extending the fair for a few days,” Rawnak Islam, a salesperson from Prokriti Porichoy publication, told UNB.

The mass audience attending the fair also narrated the same feelings regarding the duration of the fair. “We came here from Mirpur after waiting for hours on the road due to the massive number of crowd waiting in queues to enter the fair. Everyone is rushing to the fair as it’s the holiday and the fair is going to end tomorrow,” Fahim, a book-lover from the crowd, told UNB.

An extension of the fair by a few days will be better for everyone, most of the people expressed this same observation regarding the 2020 fair as it lost two significant days of profit.

The fair will continue from 11 am onwards on the last day on Saturday.