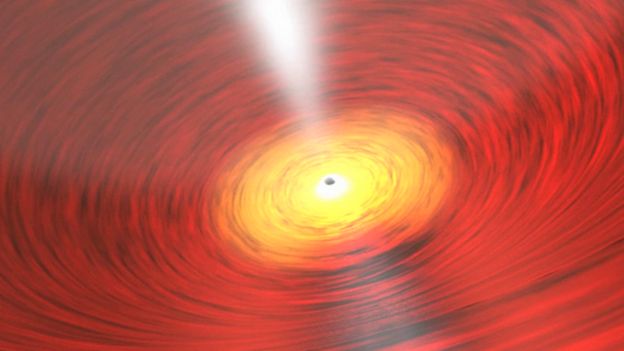 Scientists have detected evidence of a colossal explosion in space - five times bigger than anything observed before.

The huge release of energy is thought to have emanated from a supermassive black hole some 390 million light years from Earth.

The eruption is said to have left a giant dent in the Ophiuchus galaxy cluster.

Researchers reported their findings in The Astrophysical Journal.

"The best I can do is tell you that if this explosion continued to occur over the 240 million years of the outburst - which it probably didn't, but anyway - it'd be like setting off 20 billion, billion megaton TNT explosions every thousandth of a second for the entire 240 million years. So that's incomprehensibly big. Huge."

Scientists had long thought there was something strange about the Ophiuchus galaxy cluster, which is a giant aggregation containing thousands of individual galaxies intermingled with hot gas (plasma) and dark matter.

US and European X-ray telescopes had spied a curious curved edge to it.

The speculation was that this might be the wall of a cavity that had been sculpted in its plasma by emissions from a gargantuan black hole in one of the core galaxies.

Black holes are famous for gorging on infalling matter - any gas or even stars that happen to get too close. But they can also expel prodigious amounts of material and energy in the form of radio jets that then slam through the local environment.

But new low-frequency telescope data from the Murchison Widefield Array (MWA) in Australia and the Giant Metrewave Radio Telescope (GMRT) in India seems to confirm the theory.

"This object was actually observed with the Chandra X-ray telescope by a previous team and they saw this bubble in the hot X-ray plasma in the centre of this galaxy cluster, and they said, 'Well, this can't be from one of these energetic outputs because it would be enormous; the scale would be unthinkable'. So, they dismissed that possibility," explained Prof Johnston-Hollitt, who directs the MWA.

"But we went back and we observed with low-frequency radio telescopes and discovered that this cavity is filled with radio plasma."

The amount of energy required to create the cavity in Ophiuchus far exceeds the previous record holder - a cluster known by the designation MS 0735+74.

"In some ways, this blast is similar to how the eruption of Mount St Helens (volcano) in 1980 ripped off the top of the mountain," said Simona Giacintucci of the Naval Research Laboratory in Washington, DC, and lead author of the study.

"It's absolutely enormous the amount of energy that we're talking about here."