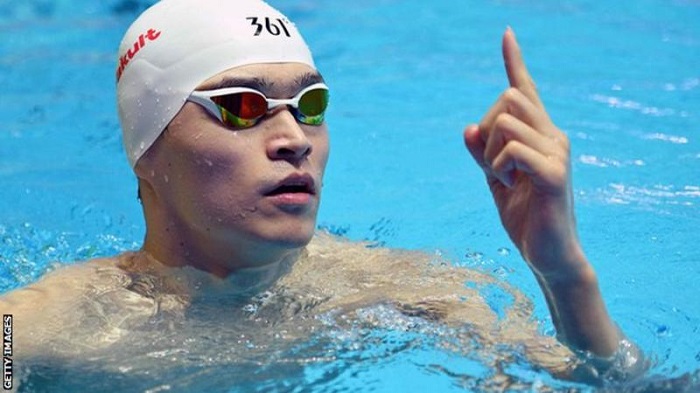 China's three-time Olympic champion Sun Yang has been banned for eight years for missing a doping test in September 2018.
The 28-year-old was initially cleared of wrongdoing by Fina, the swimming federation, in January 2019.

Following an appeal by the World Anti-Doping Agency (Wada) to the Court of Arbitration for Sport (Cas), the decision has been overturned.
An eight-year ban was imposed on Sun because this was his second offence.
He had served a three-month suspension in 2014 for taking prohibited stimulant Trimetazidine.
Sun told China's Xinhua news agency that he plans to appeal against the decision.

He said: "This is unfair. I firmly believe in my innocence."
Cas said its decision can be challenged before the Swiss Federal Tribunal within 30 days.
Sun had told an appeal hearing in November that he missed a test because testers failed to prove their identity when they arrived at his home.
He also denied a vial containing his blood samples was smashed with a hammer.
Cas said: "The athlete failed to establish that he had a compelling justification to destroy his sample collection containers and forego the doping control when, in his opinion, the collection protocol was not in compliance with the ISTI (international standard for testing and investigations).
"As the Cas panel noted, it is one thing, having provided a blood sample, to question the accreditation of the testing personnel while keeping the intact samples in the possession of the testing authorities; it is quite another thing, after lengthy exchanges and warnings as to the consequences, to act in such a way that results in destroying the sample containers, thereby eliminating any chance of testing the sample at a later stage."

Wada welcomed the ruling, and added that it was "satisfied that justice in this case has been rendered".
At the 2019 World Aquatics Championships in July, Sun won gold in the 200m freestyle but Britain's Duncan Scott refused to share the podium with him.
Australian Mack Horton took a similar stance after the 400m freestyle, years after accusing him of being a "drug cheat".
Sun's results prior to, during and after the championships will stand because he has not tested positive for doping.
He has won 11 world titles since 2011, including two golds at last year's event in Gwangju, South Korea.

When Fina originally cleared him, it said that testers had breached several rules, including failing to produce authorisation letters and a nursing licence. Sun was subsequently issued with a warning.

The Cas appeal was heard in public. The only previous time that had happened was in 1999 when Ireland's triple Olympic swimming champion Michelle Smith de Bruin failed with her appeal against a four-year ban for tampering with an anti-doping sample.