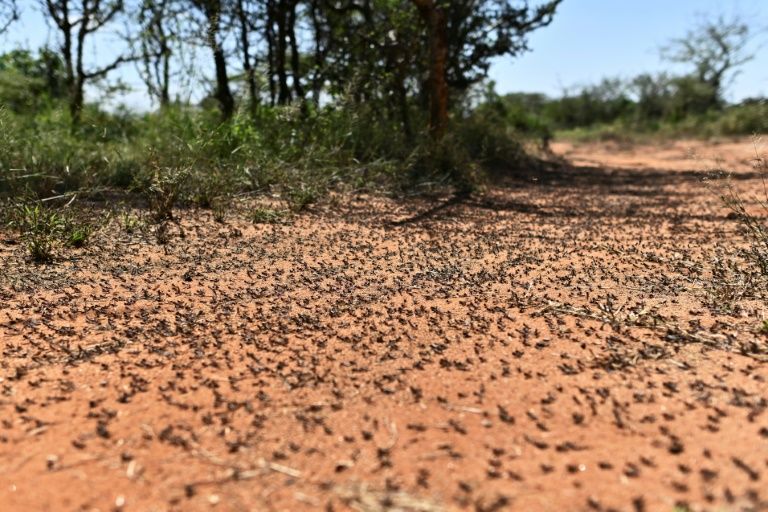 After they ravaged parts of East Africa, the Democratic Republic of Congo has became the latest country on the continent hit by an invasion of crop-destroying locusts, experts said on Thursday.

The insects made their first appearance in northeastern DR Congo’s Ituri province — its first such swarm since 1944 — on the frontier with South Sudan and Uganda, which have already been hit by locusts.

“A small group of mature Desert Locust arrived on the western shore of Lake Albert near Bunia on 21 February after crossing northern Uganda on strong northeasterly winds,” the UN’s Food and Agriculture Organization said on its Locust Watch web page.

Billions of desert locusts, some in swarms the size of Moscow city, have already chewed their way through Ethiopia, Somalia, Kenya, Djibouti, Eritrea, Tanzania, Sudan, South Sudan and Uganda.

Their breeding has been spurred by one of the wettest rainy seasons in the region in four decades.

Locusts were first seen in the DRC on February 19 in the territory of Aru, in Ituri, Jean-Francois Kamate, agricultural inspector for the area, told AFP.

“There is a risk that they will multiply. They will travel in tandem and destroy everything that is green, even the bark and the lawns,” Kamate said.

Ituri and neighbouring North and South Kivu provinces are home to tens of thousands of people fleeing militia violence and are already prone to food insecurity.