Redevelopment of Old Dhaka in limbo 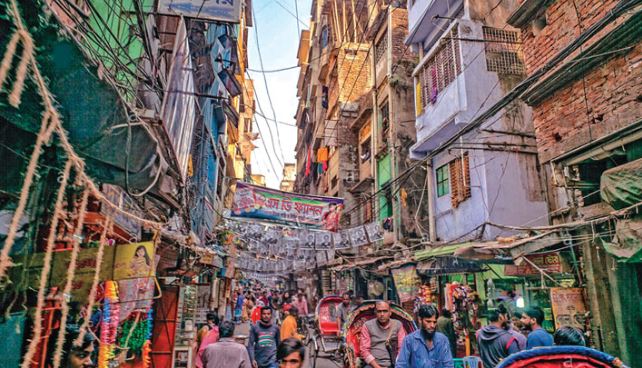 People residing in old dilapidated buildings in old part of Dhaka which is characterized by a very high density population as well as narrow lanes and streets are often confronted with various problems.

During an emergency, vehicles like ambulances and fire engines encounter lots of difficulties passing in the streets, which often lands city dwellers of the old part in big troubles.

To get rid of the situation, in 2016, Rajdhani Unnayan Kartripakkha (RAJUK) and Dhaka South City Corporation (DSCC) made plans to redevelop it, but no apparent progress has been made even after four years.

Officials of RAJUK and DSCC said they are yet to design the project due to absence of required support from both public representatives and locals of the area.

He said, “Process to formulate terms of reference to conduct a study in this regard is underway. Coordinating work with foreign organisations for technical and financial assistance is going on, as the concept of urban redevelopment is new in Bangladesh.”

Talking to the daily sun, chief town planner of DSCC Sirajul Islam said, “As a city development authority, it’s the business of RAJUK to do the job and officials of RAJUK know better about the progress of the redevelopment plan. As far as I know, our mayor had some consultation session with old Dhaka people and public representatives in middle of last year.

“Our mayor and councillors are trying to convince local residents of old Dhaka to accept the concept and get rid of the problems. We don’t have much jurisdiction over it. So, RAJUK has the authority to implement it.”

Urban planner of RAJUK Md Ashraful Islam said, “We have to redevelop the city based on community block. The derelict small buildings will be replaced by high-rises.”

“But we are facing some challenges. Firstly, we have to acquire land for the development and convince the public. Secondly, we have to fix a policy for relocation of inhabitants during the implementation period and provide them with benefits. We also have to amend laws for the redevelopment, as there is some legal barrier to implementation of the concept.

“We have conducted many researches in old Dhaka and prepared reports.

Now, we have to prepare a development project plan. Later, feasibility study will have to be done. We can start the implementation phase very soon as the newly elected mayor of DSCC has accepted the concept.

“Locals have no reason to be worried because we will execute the plan using advanced technology so that people can go back to their places of accommodation within a short time.

“We will construct the high-rise buildings in compliance with Bangladesh National Building Code and they will be resistant to earthquake.”

Design of the development concept will be displayed at RAJUK on 18 March marking the centenary of Bangabandhu’s birth.