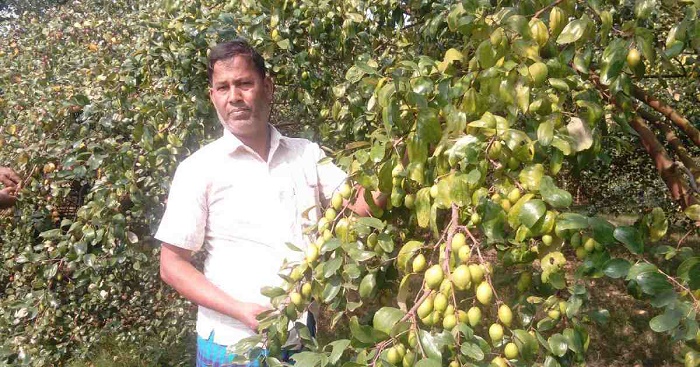 Thanks to the favourable weather conditions, bumper production of jujube, the small fruit more popular as ‘Boroi’ in the vernacular, has growers in Satkhira smiling from ear to ear.

According to the District Agriculture Extension (DAE) office, the soil of Satkhira is favorable for jujube cultivation and it has been grown commercially in the district since 2000.

Now the jujube cultivation is getting popular in the district as it is more profitable and allows farmers a quick return on their investment.

This year jujube has been cultivated over a total of 660 hectares, with the authorities setting a production target of 7,000 metric tons of jujube.

Many local varieties including ‘Baukul’, ‘Applekul’, ‘Tawainkul’, ‘Narkeli’ and ‘Dhaka Ninety’ are being cultivated in the district, and the jujube of Satkhira also finds markets in other districts  including Khulna, Dhaka and Chattogram after meeting the demand of people.

Most of the farmers are making profits from selling the fruit.

Kalyan Ghosh, a jujube grower of Patkelghata in Tala upazila, said this year one kg jujube is being sold at Tk 80-100 at the retail level.

Arebindu Biswas, deputy director of DAE, said “The jujube farmers are blessed with the bumper production of the fruit this year and getting good cash after selling those to the market.”