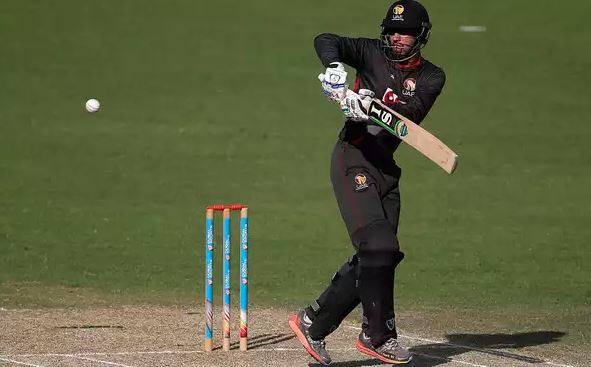 The United Arab Emirates completed an unbeaten run through the ACC Western Regional Asia Cup Qualifier with a comprehensive win over surprise runners-up Kuwait in the tournament final at Muscat.

Both teams had earlier secured passage to the next round of qualification, the four team Asia Cup Qualifier, with semi-final wins over Qatar and Bahrain respectively.

Young opener Chirag Suri, who continues to grow into the senior role thrust upon him by a string of suspensions that hit the UAE at the T20 World Cup Qualifier late last year, was again the stand-out bat for the Emiratis in the final. His 60 off 40 from the top of the order set the tone of the innings (and ensured he would finish tournament top-scorer with 239 runs across five games). A blistering, unbeaten 45 off 15 balls down the order from Waheed Ahmed took the total to 199-5 by the break. Left arm spinner Sultan Ahmed bagged a career-best return of 4-9 in 4 overs to ensure Kuwait wouldn't make it even half-way to the target, finishing on 97-7 as the UAE claimed a 102-run victory.

The Kuwaitis will nonetheless be pleased with their week's work as they secured the second berth at the Qualifier Final. Kuwait had started their campaign strongly, ambushing the more-favoured Saudi Arabia in their Group A opener. Former Saracens left arm spinner and eventual tournament top wicket-taker Mohammed Aslam choked the scoring with a remarkable spell of 2-3 in four overs as the Saudis struggled to 113 all-out. Ravija Sandaruwan then smashed an unbeaten 84 off 38 to see Kuwait romp home in the 11th over.

Coupled with a win over underdogs Iran, who made their return to competitive internationals after an absence of almost a decade, would be enough to see Kuwait through to the semi finals. Aslam was again the star claiming four wicket for just five runs from his four overs before Usman Patel's unbeaten 59* saw them seal an eight-wicket win. Yousef Shadzehisarjou's 39 off 46 was Iran's best effort with the bat in that match and indeed in their winless tournament.

Saudi Arabia likewise went out in the group stage, despite coming closer than any of the other Group B sides to derailing the UAE's dominant run. For the first 15 overs of the game, the UAE seemed on course for an insurmountable total, with Chirag Suri and Rohan Mustafa taking the Emiratis to 135-3 with five overs remaining, but the Saudis would come roaring back into the game in what must rank as a strong contender for the most successful death bowling display in the history of the T20Is.

Seamer Abdul Wahid and his off-spinning namesake Abdul Waheed claimed seven wickets between them for the cost of just 15 more runs. Wahid wrapped up the innings in the 19th over with three wickets on four balls. as the final four wickets fell with a leg bye in the runs column. Incidentally, the UAE collapsed from 149-6 to 150 all out. The total would nonetheless prove beyond the Saudis. The left-arm spin combination of Sultan Ahmed and skipper Ahmed Raza choked the scoring as Saudi Arabia fell 12 runs short.

Meanwhile, in Group A, the final day would prove no less dramatic, with hosts and pre-tournament favourites Oman sliding down to third place as Bahrain performed an improbable net-run rate adjustment with a thumping win over Qatar in their final match to top the group. Whilst the unfancied Maldives went winless through the tournament, Qatar had looked set to comfortably top the group after upsetting hosts Oman in their second group game. Star batsman Kamran Khan set up a challenging total of 175-5 with a 40-ball 54, before veteran seamer Awais Malik and left-arm spinner Mohammad Nadeem took three wicket apiece to see Oman skittled for 141 in reply.

Nonetheless heavy wins over Bahrain and the Maldives in their other two games would have left the hosts reasonably confident of progressing ahead of the final game. They were level with Qatar at the top of the table on four points each and with third-placed Bahrain trailing them by a win and a net run rate deficit of 0.5 and Qatar heavy favourites ahead of the final group game.

As it turned out, Bahrain would overtake not only the hosts but also overturn and NRR deficit of almost 3 runs per over against their opponents. Left-arm spin again proving to be the key factor, as Abdul Majid's return of 4-23 in 4 saw Qatar stumble to 106-9 in their 20 overs. At the break, any one of the three contenders could have still lost out, with Bahrain needing to chase inside of approximately 15 overs to secure second place, inside 12 to top the group or inside of 9 to claim the top spot and relegate Qatar to third place. Sarfaraz Ali's 27-ball 43 kept them in the hunt, but it was Ammad Udin who stole the show, blasting an unbeaten 41 off 15 from number five, and finishing the innings with a six. His innings saw Bahrain overshoot the target by two runs on the fifth ball of the 11th over. Those two runs proving the margin by which they beat Qatar to the top spot. So Oman, the only Asian Associate to qualify for the next T20 World Cup, were dumped out of their own tournament by means of a net run rate spreadsheet.

Neither Qatar nor Bahrain would profit much by Oman's misfortune. Even though Qatar certainly had cause to rue their performance in their final group game when they came up against the UAE in the qualification-deciding semi-final. Despite the UAE recording their lowest first-innings score of the tournament, Qatar were unable to press home the advantage. Junaid Siddique took 4-12 in 4 as the Qataris were bowled out for 94 on the final ball.

Kuwait were arguably the only team to profit from the dramatic finish in Group A, dodging the highly-rated Qataris in the semi final to cruise past a relapsing Bahrain. Sandaruwan was again the star as he drove the scoring with a 39-ball 67 to set Kuwait on course for an imposing 210-4 from the 20 overs, before Aslam bagged another four-fer in the second innings. Bahrain's chase was brought to a premature end as they were rolled for 123 in the 17th over.

Kuwait and the UAE both progress to the Asia Cup Qualifier final to be held in Kuala Lumpur in August, where they will be joined by the two finalists from next week's Eastern Regional Qualifier, which will see hosts Thailand take on Nepal, Hong Kong, Singapore and Malaysia.