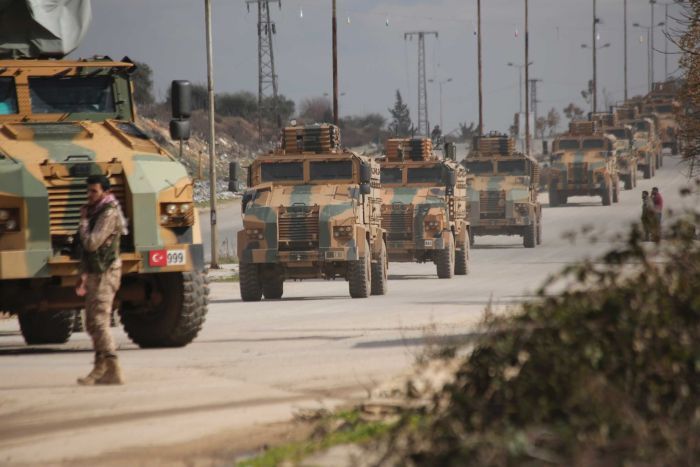 At least 33 Turkish soldiers have been killed in an air strike by Syrian "regime forces" in north-western Syria, a senior Turkish official has said.

Syrian forces supported by Russia are trying to retake Idlib from rebels who are backed by Turkish soldiers.

The Syrian authorities have so far made no public comments on the latest escalation in Idlib, the last Syrian province to remain in opposition hands.

The Turkish military began hitting back at the Syrian targets after President Recep Tayyip Erdogan held an urgent top-level security meeting in Ankara.

The Turkish leader wants the Syrian government forces to pull back from positions where Turkey has set up military observation posts and had earlier threatened to attack them if they did not halt their advance.

But Syria's government and Russia have rejected his demand to pull back to ceasefire lines agreed in 2018. Russia has also accused Turkey of violating the 2018 ceasefire by backing rebels with artillery fire.

The UK-based monitor, the Syrian Observatory for Human Rights, said at least 34 Turkish troops had been killed in Thursday evening's air strike.

The wounded had been brought back to Turkey for treatment, Mr Dogan said.

"All known" Syrian government targets were under fire by Turkish air and land support units, Turkey's communications director Fahrettin Altun was quoted by state news agency Anadolu as saying. Turkey had decided to "respond in kind" to the attack, Mr Altun said.