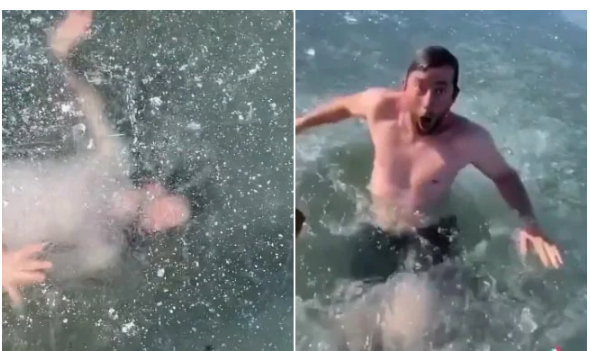 A TikTok star has said that he came "close to dying" while filming a stunt for his outdoor adventure account.  Jason Clark, who has over 4 lakh followers on TikTok, shared an Instagram post detailing his brush with death. He said that he became trapped under a sheet of ice and could not find his way out until the very last second, when he had almost accepted he "wasn't going to make it".

"I have never been this close to dying," he wrote, sharing a distressing video of the incident. The video shows Jason taking a deep breath before lowering himself into a frozen lake through a hole.

In the video, he seems to lose his way while swimming under the ice. The footage shows him struggling to locate the opening, and, at one point, even trying to break the ice with his back.

He said that he became confused because the bottom of the ice did not look any different from the water at the hole.

"When I flipped around and felt solid ice I thought I was at the hole," wrote Jason Clark. However, when the TikTok star realised he wasn't at the hole, he decided to follow the dust he had kicked up, hoping it would lead him back to the opening.

Instead, he said, the "dust I kicked up had drifted and led me further away."

"I then tried to break the ice with my back, you can see in the video," he added, before saying that something made him turn around one last time - a decision that probably saved his life.

"I swung my hand at what I though was just a lighter spot of ice and my hand came through. I then got a ton of energy to stand up," he said. The video shows him emerging from the hole and gasping for breath.

In his post, Jason also spoke about how the person filming the video could not grasp the severity of the situation and thought he was joking.

Jason Clark's video has collected a whopping 21 million views on TikTok, and another 1.6 lakh on Instagram.

"This video gave me so much anxiety," wrote one person in the comments section. "This is NUTS," said another.

Despite the horrifying experience, the TikTok star went back into the lake for another attempt, which, he said, went slightly better, thanks to a "comically big" hole in the ice.

This isn't the first time an influencer has courted danger for viral fame. A few days ago, union minister Piyush Goyal had shared a TikTok video of a man falling off a moving train while performing a stunt, asking citizens to be careful.