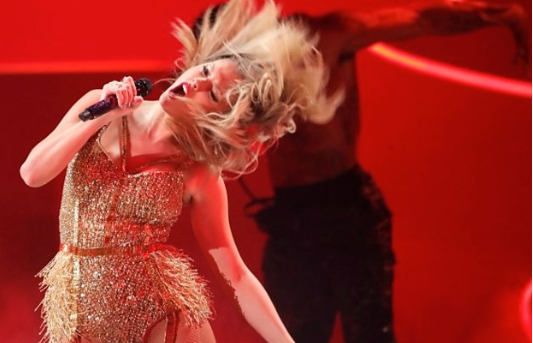 Taylor Swift plays a man-spreading, cigar smoking, strip-club-going male business executive in the new video for her track, The Man.

The song, taken from her seventh studio album Lover, is the first new music released since her departure from Big Machine Records.

The credits show how the video was directed, produced and owned by Swift.

Mid-way through the video, the lead character, in heavy prosthetics, stops to relieve himself against an underground wall, bearing the name of all six of Swift's albums owned by Big Machine.

There's also a no scooters sign visible, alongside one saying "Missing. If found return to Taylor Swift".

Last summer Swift accused music mogul Braun of "bullying" and attempting to "dismantle" her "musical legacy" after he bought most of the US pop star's life's work, thanks to his acquisition of her former record label Big Machine for $300m (£237m).

In November she claimed Braun and Big Machine founder Scott Borchetta had prevented her from performing a medley of her old hits at the American Music Awards.

Big Machine denied the claims and the performance went ahead as originally planned.

Braun pleaded with her to stop her public campaign against him, saying he had received death threats.

The singer made a subtle nod to their spat while performing at the AMAs, where she won six awards including artist of the decade.

She took to the stage wearing a prison-style white shirt stencilled with the names of the albums in question, while performing new and old songs.

While receiving another artist of the decade award at the Billboard Awards, Swift called out Braun directly, saying her treatment had been "the definition of the toxic male privilege".