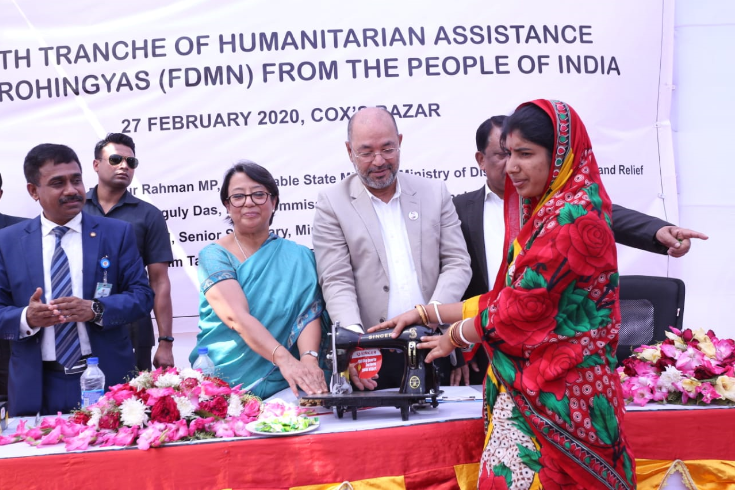 Indian High Commissioner to Bangladesh Riva Ganguly Das said her country would like to see a safe and sustainable repatriation of forcibly displaced Rohingyas to Myanmar from Bangladesh.

India keeps all its efforts in finding a sustainable solution to the Rohingya crisis, she said while distributing sewing machines among Rohingya women at Kutupalong Camp X-4 in Ukhiya in Cox's Bazar.

Since the fresh influx of Rohingyas in 2017, Riva said, India remains beside Bangladesh to deal with the humanitarian crisis.

India has already built numbers of houses in Rakhine state so that Rohingyas could stay safe there after returning to their land of origin, she said.

State Minister for Disaster and Relief Dr Enamur Rahman inaugurated the sewing machine distribution programme at the camp, was also attended by disaster management and relief secretary M Shah Kamal, among others.

The Indian High Commission also handed over 1000 sewing machines, 32 office tents, 32 rescue kits and 99 family tents to the disaster management and relief ministry under its fifth tranche of relief assistance for Rohingyas.

This fifth tranche of assistance is part of a humanitarian relief program that has been initiated by Indian government since September 2017 by delivering a first consignment of 981 metric tons of relief supplies.

In May 2018, 373 tonnes of relief materials were handed over while 1.1 million liters of Super Kerosene Oil and 20,000 stoves and 2,25,000 blankets, 2,00,000 woollen sweaters and 500 eco-friendly solar street lights supplied under third and fourth tranche of assistances in September and December 2018 respectively.

As a friend and neighbour, India is always ready to stand with Bangladesh at times of challenge, said a Indian high commission press release issued from Dhaka today.