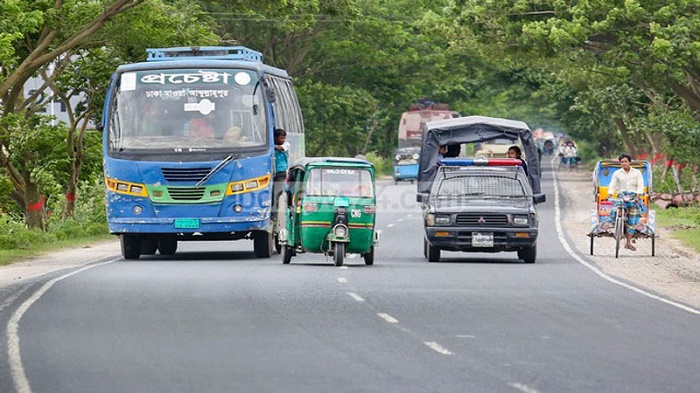 Small vehicles such as auto-rickshaws, easy-bikes, battery-run rickshaws, Nasimons and Karimons are still plying highways countrywide despite a ban, leading to a sharp rise in fatal road accidents.

Road accidents are commonplace on highways across the country due to the unbridled plying of such small vehicles.

A drive against the plying of small vehicles was continued on different highways, including Dhaka-Chattogram highway, Superintendent of Police (highway, Cumilla zone) Nazrul Islam told the daily sun on Wednesday.

“We seized a large number of CNG-run auto-rickshaws,” the SP said, adding that some are running on some highways at night, evading law enforcers.”

“We are trying to stop plying of such banned vehicles on highways,” he added.

Such a drive is a regular process. “Due to our strict monitoring, movement of almost all such unfit and banned vehicles has already stopped on highways. Some are plying secretly,” he added.

But, the SP denied the allegation of taking money by the highway police from the three-wheelers.

On Tuesday night, four people were killed as a microbus collided with a CNG-run auto-rickshaw on Begumganj road in Battoli area of Laxmipur.

Two days ago, five people were killed and several others injured in two separate road accidents in Naogaon and Chapainawabganj.

Lack of proper monitoring and the authorities’ indifference in the months after widespread protests for safe roads are the main reasons behind the sharp rise in road accidents.

Road Transport and Bridges Minister Obaidul Quader admitted recently that the number of deaths in road accidents was increasing due to the plying of three-wheelers on highways.

On August 1, 2015, the road transport and bridges ministry imposed a ban on the movement of three-wheelers and non-motorised vehicles on 22 national highways in the wake of huge traffic accidents on highways.

Plying of three-wheelers, auto-rickshaws and other local human-haulers on highways is rampant in Faridpur.

Nazrul, an auto-rickshaw driver, said he bought a monthly token from the police for Tk 600 to ply his vehicle on Faridpur-Jessore highway.

“Several hundred drivers of our area are regularly buying these month tokens,” he added.