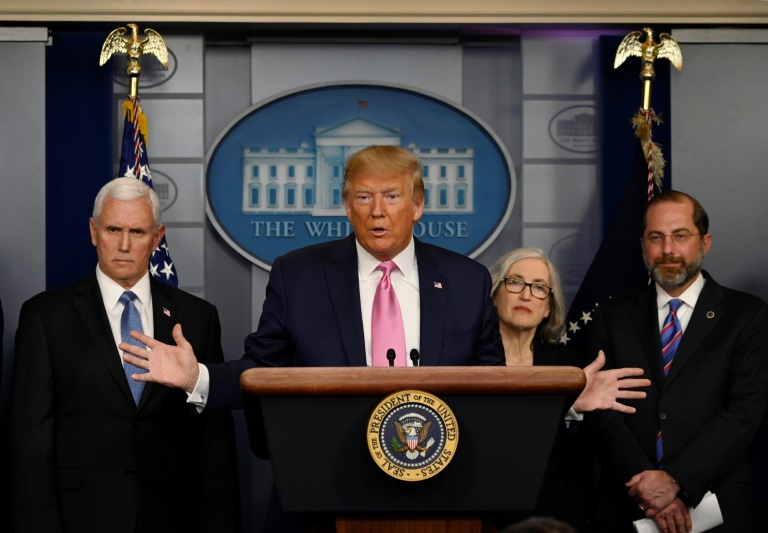 Donald Trump said Wednesday he was considering US travel restrictions on Italy and South Korea over coronavirus fears, adding the situation would not inevitably worsen in the United States.

The president's optimism about containing the pathogen contradicted a senior health official in his own administration and came as authorities said they had identified the first case of unknown origin in the United States.

He appointed vice president Mike Pence to lead the response to the disease.

The message was at odds with the Centers for Disease Control and Prevention, which urged Americans a day earlier to be prepared to cancel mass gatherings and said schools and businesses should look at developing teleworking plans.

As of Wednesday, there were 60 cases in the United States -- 15 detected through the public health system and 45 repatriated from abroad, either from a cruise ship off Japan or from Wuhan, the Chinese city where the first cases were identified.

The CDC said the latest case in California "did not have relevant travel history or exposure to another known patient" -- meaning it could represent the first instance of "community spread" in the US, though this was not yet confirmed.

Community spread means spread of an illness for which the source of the infection is unknown.

Foreign nationals traveling from China within the past two weeks are currently banned from entering the US, and Trump said more countries could be added to the list.

South Korea has almost 1,600 cases, the highest outside China, while Italy has 400. Both countries have reported 12 deaths.

"Italy is, you know, a deeper problem, and we're checking people coming in very, very strongly from those and at some point we may cut that off," Trump added.

On Wednesday night the state department raised its travel advisory caution level for South Korea to the second-highest, now urging Americans to reconsider traveling there.

Trump added that vice president Mike Pence had been assigned to lead coordination of the government's response and would report back to him, taking over the role from Health Secretary Alex Azar.

Trump's briefing came after US lawmakers accused the administration of downplaying the crisis and underfunding the response.

On Monday, the White House asked Congress to make at least $2.5 billion available for preparedness and response, including developing treatments and vaccines and buying equipment for a strategic national stockpile.

Senate Democratic leader Chuck Schumer said the figure was "too little and too late," proposing instead $8.5 billion. Trump later told reporters he would be happy to accept more money.

The president also took to Twitter earlier in the day to insist his administration is "doing a GREAT job," blaming the media for trying to stoke fear in a tweet in which he spelled the name of the virus incorrectly.

"Low Ratings Fake News MSDNC (Comcast) & @CNN are doing everything possible to make the Caronavirus look as bad as possible, including panicking markets, if possible," he wrote, using a derogatory acronym for the MSNBC network.