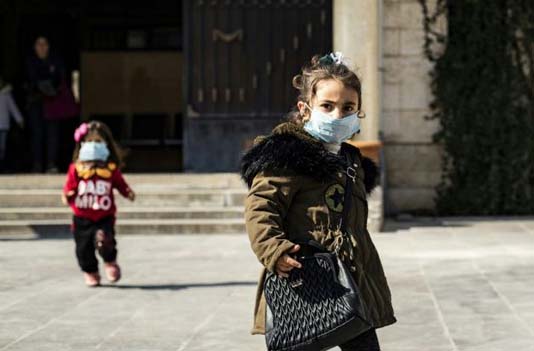 Coronavirus cases spread in Europe and beyond on Wednesday, as the US announced it was considering new travel restrictions and Latin America confirmed its first patient from an epidemic that has killed thousands worldwide.

New cases have emerged across Europe, many linked to the continent’s coronavirus hotspot in northern Italy, amid warnings from health experts to rein in hysteria as the virus continues its march beyond China’s borders.

The novel coronavirus has killed over 2,700 people and infected more than 80,000 in 34 countries, although the vast majority of cases remain in China, according to the World Health Organization (WHO). But the WHO said Wednesday more new cases were now being recorded outside China than inside the country, where the virus first emerged in late December.

In a sign of the virus’ expanding footprint, Brazil confirmed Latin America’s first case, a 61-year-old who travelled to Italy’s Lombardy region.

Several governments have advised against travel to Italy — which has 400 cases and 12 deaths.

US President Donald Trump told reporters Wednesday his country was considering travel restrictions on Italy and South Korea, which has almost 1,600 cases, the highest number outside China.

The US has already imposed an entry ban on foreign nationals who traveled to China in the past two weeks.

Greece, Georgia and Norway all confirmed their first coronavirus cases on Wednesday.

The Greek case is a woman who had been in northern Italy, while France, Spain, Croatia, Austria, North Macedonia and Algeria have all reported cases linked to the country.

Pakistan also detected its first two cases on Wednesday, days after shutting its border with Iran, which has also emerged as a major coronavirus hotspot.

Even as new cases continued to multiply beyond China’s borders, the European Union sought to head off hysteria over the outbreak.

“This is a situation of concern, but we must not give in to panic,” EU Health Commissioner Stella Kyriakides told reporters in Rome.

Fears over the epidemic’s spread have rocked global markets in recent days, while sports matches and festivals across Europe have been cancelled.

A March 7 Six Nations rugby match between Italy and Ireland in Dublin was called off Wednesday, and the alpine skiing World Cup Finals — due to take place in Italy next month — will be held without any fans on the slopes.

Trump, who has accused the American media of “panicking markets”, said the virus’ spread on US soil was “not inevitable”, contradicting a senior health official in his administration.

Shortly after an upbeat press conference, in which he appointed Vice President Mike Pence to lead the response to the epidemic, US health authorities said they had detected the first case in which the patient had not been to any exposed regions or come into contact with another known coronavirus patient.

The virus is believed to have emerged in a market in Wuhan city in China’s Hubei province in late 2019, where it may have been transmitted to a human from an animal.

China imposed extraordinary quarantine measures in several cities, locking in tens of millions of people as it sought to curb the virus’ rapid spread.

The country announced Wednesday that people arriving in Beijing from other countries hit by the virus epidemic will go into 14-day self-quarantine. The WHO has praised Beijing for its response, though the communist government has faced criticism at home for silencing a whistleblowing doctor who has since died from the disease.

The WHO has called for countries to “prepare for a potential pandemic” — an epidemic that spreads throughout the world — even as new cases and deaths in China have continued to dip.

It warned that poor countries are particularly at risk, sparking fears of how countries in Latin America and Africa would cope.

In South Korea, the most-affected country after China, the outbreak has been traced to a religious sect in the southern city of Daegu.

The city’s streets have been largely deserted for days, apart from long queues at the few shops with masks for sale.

Meanwhile in the Middle East, the virus has claimed 19 lives in Iran — the highest tally outside China — with 139 infected.

Iran’s cyberpolice on Wednesday said 24 people were arrested for rumour- mongering about the outbreak.

Reporters Without Borders said Iran “seems to be concealing information about the epidemic in line with China’s example”, accusing it of also blocking independent reporting of the outbreak.

Several Gulf countries have announced measures to cut links with Iran in an attempt to stop the virus spread, and Saudi Arabia has suspended visas for pilgrims visiting Mecca.