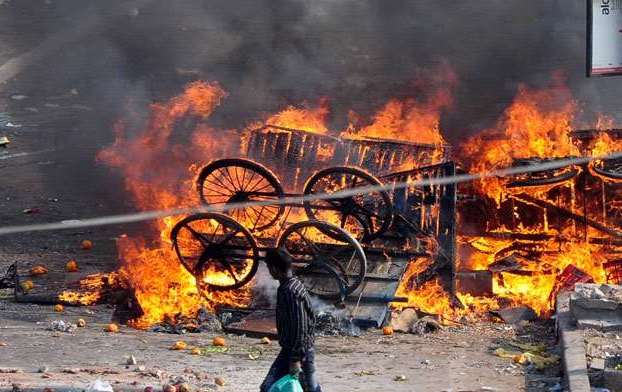 The death toll in the deadly violence that has rocked parts of Delhi for three days rose to 34 on Thursday.

While a brittle quiet settled over parts of riot-hit northeast Delhi on Wednesday, violence was reported from some other places, with shops set ablaze and the body of an Intelligence Bureau (IB) staffer found in a drain in Chand Bagh, News18 reports.

The Delhi Police said 106 people have been arrested so far for their alleged involvement in the violence and 18 FIRs registered.

This week's battles between Hindus and Muslims have seen mobs armed with swords, guns and acid raze parts of a northeastern district of the Indian capital.

The clashes, which also left more than 200 injured, were triggered by protests against a citizenship law seen by many critics as anti-Muslim and part of Modi's Hindu nationalist agenda.

They exploded into brutal violence on Monday and Tuesday, with residents forced to flee their homes after seeing dwellings destroyed, a mosque attacked and a tyre market and two schools set ablaze.

"I appeal to my sisters and brothers of Delhi to maintain peace and brotherhood at all times. It is important... calm and normalcy is restored at the earliest," Modi tweeted on Wednesday.

Delhi's chief minister, Arvind Kejriwal, a political opponent, called for the army to be deployed and for a curfew to be imposed.

The US embassy issued a travel warning advising citizens to exercise caution.