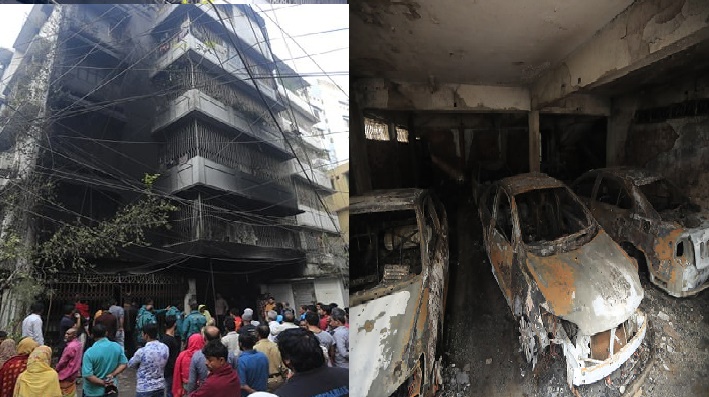 At least three persons died and 11 others injured in a fire incident at New Eskaton in the Hatirjheel area of the capital on Thursday.

A two-month-old baby survived luckily when her mother threw the infant onto a rooftop of a nearby house to save his life from fire.

The mother named Parul Akhter lives on the rooftop of the five-storey building which has been engulfed by fire on Thursday morning.

Witnesses said the fire originated from the ground floor of the house with holding number 45/A on Delu Road at New Eskaton at around 4:20 am.

Amid heavy smoke the residents woke up in fear and started screaming for help.

Having no option, the mother threw her boy named Saad to next building and he was survived.

The mother received injuries while climbing down the building while the father broke one of his legs while jumping down from the rooftop.

“The boy is quite okay now. But his father Shahbuddin Siab got his leg broken and his mother was injured,” he said.

The Thursday morning appeared as a nightmare of many residents of the building as the devastating fire engulfed the building at dawn.

At least three persons died and 11 others injured in a fire incident at New Eskaton in Hatirjheel of the capital.

The deceased have been identified as Abdul Quader, 45, Afrin Jannat Juthi, 17, and AKM Rushdi, 5.

Of them, the condition of Shahidul and Jannatul are critical. The fire gutted 43 percent of Shahidul’s body and 95 percent of Jannatul, said SI Bacchu, said in-charge of DMCH Police Outpost.

They are now undergoing treatment at Sheikh Hasina National Institute of Burn and Plastic Surgery, he added.

Dead Quader, son of Mohammad Ullah, hailed from Laxmipur sadar, was a staff of Classic Fashion, a buying a house, on the ground and the first floors of the house. He died inside the godown of the buying house on the ground floor. His families identified his body.

Rushdi is the child of Shahidul and Jannatul Ferdousi of Shibpur in Narsingdi. His grandfather identified the body.

Juthi, daughter of Jahangir Alam, an administrative officer at Public Works Department, and Lal Banu, was an HSC examinee from Viqarunisanoon School and Collage. They lived in a flat on the rooftop of the house.

Suruzzaman, paternal uncle of the victim, said during the fire Juthi tried to go down by the staircase.

Lutfar Rahman, caretaker of the house, said that he and his grandson were sleeping in a room on the ground floor. “My grandson saw the fire first and told me. We then came outside and shouted the residents on the fire,” he said.

When asked about the house owner, he said that it is owned by several people. They do not live in the house.

Debashis Bardhan, deputy director (Dhaka Division) of Fire Service and Civil Defence (FSCD), told the daily sun that they came to know about the incident at 4:31am and a unit of Tejgaon Fire Station first reached the spot first. Later, seven other units from different stations reached the spot and could douse the fire around 5:06am.

He said they so far rescued about 25 residents of the house. He has added that it is a residential building, but it was rented for a mini garment factory, which is totally illegal.

In response to a question whether there was any chemical in the godown on the ground floor, he said they did not find.

“Even after that, we have formed a five-member investigation committee with Deputy Director Abul Hossain as the head to look into the matter. After the inquiry, we will be able to know everything.”

When asked about the reason of the blaze, he said that the investigation say about it.