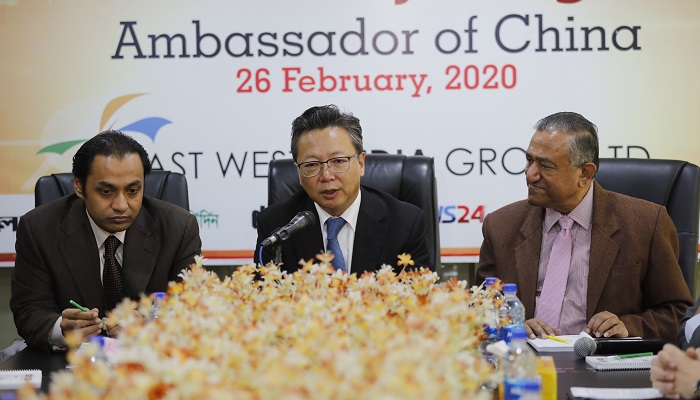 Managing Director of Bashundhara Group Sayem Sobhan Anvir made the offer during a view-exchange meeting with Chinese Ambassador in Dhaka Li Jiming and other senior officials of the embassy on Wednesday.

During the conversation, Bangladesh Pratidin Editor and News24 and Radio Capital CEO Naem Nizam laid emphasis on construction of ‘China Town’ in Dhaka.

Being the owner of the country’s largest real estate company, Bashundhara Group can offer land for the purpose, Naem Nizam said.

The Chinese ambassador appreciated the proposal, saying that he would take all necessary steps in this regard.

“This is a very good piece of news for me this morning. I’ll convey the proposal to the authorities concerned of my country,” Li Jiming said.

Sayem Sobhan Anvir also said a road in Bashundhara Residential Area will be named as ‘China Street’ soon as a token of friendship with China.

He invited the Chinese envoy to attend the launching ceremony of the China Street.

Li Jiming and other senior officials of the embassy paid a visit to the Daily Sun and other media outlets of East West Media Group Ltd (EWMGL), a concern of Bashundhara Group.

Held at the Daily Sun office at Bashundhara Residential Area, the programme was conducted by the daily’s editor Enamul Hoque Chowdhury.

The Chinese envoy said his country wants to import more products from Bangladesh to reduce trade imbalance between the two countries.

“Currently, trade between China and Bangladesh is not balanced. China wants more Bangladeshi products in its market. Therefore, we allowed duty-free access of 97 percent of Bangladeshi items,” he added.

The Bashundhara Group managing director called for more Chinese investment in the private sector of Bangladesh. He requested the Chinese envoy to convince his government and play due to role in this regard.

Referring to Bashundhara Group’s major stake in construction of Padma Bridge, power plants and many other Chinese projects, he said such partnership has to be expanded in the future.

Around 70 percent of Bangladesh’s economy is contributed by the private sector which needs Chinese partnership and investment to flourish, he added.

Bashundhara Group has been partnering with 20 major Chinese companies for the last 25 years, the managing director said.

The Group’s engagement in various partnership projects involves over $1billion, he said adding “Now we want to take the partnership to a new height.”

He said Bangladesh should increase export basket by diversifying its products and creating congenial business environment.

The Chinese ambassador, however, pointed out some problems which are standing in the way of foreign investment.

He said congenial atmosphere and equitable treatment between local and foreign investors in Bangladesh have to be improved.

Li Jiming said many Chinese companies are operating in various economic zones in Bangladesh while other entrepreneurs are investing and looking such scopes.

Chinese entrepreneurs prefer Bangladesh to Myanmar and Cambodia for investment, he opined.

China invests $5billion to develop economic zones in Bangladesh to boost the country’s capacity to export and reduce trade imbalance, he said.

Being the biggest development and trade partner of Bangladesh since 2006, China is expanding its engagement gradually, the Chinese envoy added.

Li Jiming referred to Chinese support for the construction of multi-billion Padma Bridge and many other mega structures being constructed in Bangladesh.

China-Bangladesh Exhibition Centre is going to be established as a mark of excellent bilateral ties between the two countries, he said.

At this stage, he praised the role of International Convention City Bashundhara (ICCB) in housing various local and international trade shows.

Terming a suggestion by Bashundhara managing director to open China bank in Dhaka ‘a brilliant idea’, the Chinese envoy said he will take steps in this regard.

The Chinese embassy is positively considering inviting Chinese bank in Bangladesh to cooperate with both the Bangladeshi and Chinese businessmen for their two-way trading, Li Jiming said.