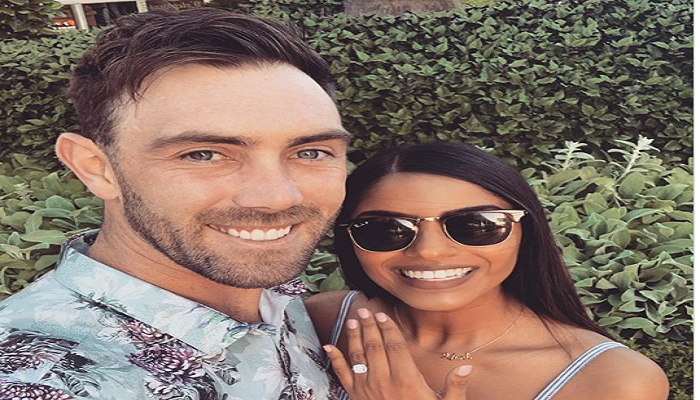 Glenn Maxwell, Australia all-rounder, took to Instagram to reveal that he got engaged to his Indian-origin girlfriend Vini Raman on Wednesday. Glenn Maxwell posted a picture with his fiancee and captioned the post with a ring emoji. Vini Raman also posted a picture on her Instagram account and revealed that Glenn Maxwell had asked her to marry him last week. "Last week my favourite person asked me to marry him #YES," she captioned the post.

Glenn Maxwell was left out of Australia's squad for the tour to South Africa after the all-rounder was advised to undergo arthroscopic surgery on his left elbow.

The injury forced Maxwell to sit out of action for six to eight weeks, Cricket Australia had confirmed on February 12.

The 31-year-old explosive batsman had taken a mental health break back in October last year.

Maxwell said it was his girlfriend, who first noticed the change in him.

"It was actually my partner who suggested I speak to someone, she was the first one who noticed it, so I should probably thank her as well. Once I had that initial conversation it was a big weight off my shoulders," Maxwell had said.

The Australian credited his girlfriend who stood by him during his initial struggles with mental health.

"My girlfriend was probably No. 1, it wasn't an easy job for her to deal with me going through my mood swings for the first few weeks, but Michael Lloyd was the guy I had the initial conversation with, he's been someone who I've confided in since back in the academy days, so I've known him for well over a decade now."

Maxwell returned to action in the Big Bash League where he led Melbourne Stars to the finals of the franchise-based tournament.