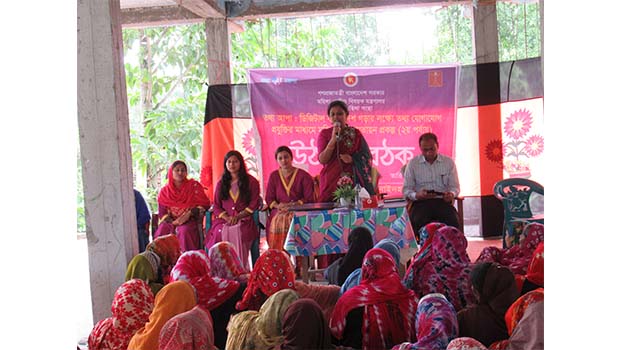 Tamanna Islam, a twelfth grader of a local college of Gaurnadi Upazila of Barishal district, went to a local market to apply for the health assistant post through online. But she could not to do that roaming different shops for huge crowds.

Later, she came to know about ‘Tathya Apa’ from her classmates. The next day, she went to the office of ‘Tathya Apa’ and filled up her application through online free of cost.

Moni Akther, a pregnant woman, is a resident of Bamna upazila headquarter of Borguna district. She has been suffering from different health related complexities for a long time. But she could not understand to which doctor she will visit or how she will reach.

In such a crying need, an adolescent girl of her neighborhood told her about the ‘Tathya Apa’. Accordingly, with the tips of ‘Tahya Apa’ she received treatment from Sadar Hospital and became cured.

Not only Tamanna or Moni, thousands of people from divisional city to upazial level are receiving services from the offices of ‘Tathya Apa’ every day. Grassroots people now get information related to child and women health problem and treatment methodology with the outcome of Digital Bangladesh’s information technology.

Official sources said Jatiya Mohila Sangstha under the auspices of Women and Children Affairs Ministry has been implementing the project for empowerment of women through information and communication technology aimed at establishing digital Bangladesh.

The main objective of the project was empowerment of the women who do not have access to digital gadgets like internet, computer, email or videoconferencing of these modern tools of communication. Since inception of ‘Tathya Apa’ at Gournadi Upazil, its officials have been providing information to the villagers of remote areas to connect them with the modern technology to make their life easier.

As the first phase of the project was successful, in the second phase, it has now being implemented in 490 upazilas to provide digital services to rural poor and underprivileged women.

The services include online-based information related to health problem, commodity market, agriculture (use of balanced fertilizers and pesticides) and filing up of online job applications. One can also get necessary assistance for legal aid in case of being tortured.

Besides, the officials of ‘Tathya Apa’ have been providing information on education, health and sanitation, law, business and gender among the villagers in the project areas through laptop.

Tamanna, one of the beneficiaries of the project, said earlier they had to face unpleasant situation when they used to go to the local market to fill up their job application forms.

“But I got hassle-free service in the office of ‘Tathya Apa’. It’s a blessing for our women folk,” she said. Information service official of Gournadi upazila Shilpi Banik said, the workers of ‘Tathya Apa’ have been providing information on education, health and sanitation, law, business, gender and agriculture among the grassroots poor and underprivileged women. Besides, they are also working to create women entrepreneurs.

So far, 3,500 women of four unions of Bamna upazila in Barguna district were provided with different information services under the project.

Information service providing official Ruby Ara Khatun of Bamna upazila said the government has been implementing the project to attain its vision 2021 through empowerment of women.

Bamna Upazila Nirbahi Officer (UNO) Sabrina Sultana said the government’s ‘Tathya Apa’ project has opened the door of globalization for the women side by side with empowering women in the country.

“In the first phase, the project was successfully implemented in 13 upazials. Now it is being implemented across the country for women empowerment.

“I hope that it will become successful and the trend of women empowerment will rise in the days to come,” she said.