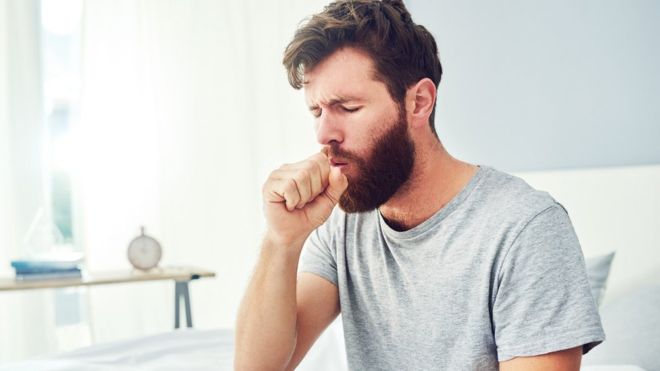 Millions suffering from a chronic cough could have their debilitating symptoms relieved by a new treatment, according to a study.

Up to 10% of adults worldwide experience symptoms with no clear underlying cause.

Some suffer for decades and there is currently no effective treatment.

Researchers at the University of Manchester said a clinical trial resulted in a significant reduction in patients' symptoms.

Experts said the use of a potential new drug, Gefapixant (MK-7264), appeared to result in a notable decrease in symptoms.

A total of 253 men and women from the US and UK who had suffered from a cough - but were otherwise healthy - that had been unresponsive to treatment for an average of 14.5 years were recruited for the 12-week trial.

They were either given a placebo or Gefapixant twice a day for 84 days but were not told which, and were given doses of either 7.5mg, 20mg or 50mg.

Before the trial, patients reported that they coughed around 24-29 times per hour.

Following 12 weeks of treatment, those being given the drug reported a reduction to, on average, 11 coughs per hour.

However, researchers noted that those taking a placebo also reported a reduction, down to 18 times per hour.

"Many patients with a chronic cough are driven to seek treatment because of the significant negative impact it can have on their quality of life, but at the moment physicians are unable to help," said Prof Jacky Smith from the University of Manchester, who led the study.

"Ours is the first study to report a treatment that is safe and effective over the longer term."

She suggested that the placebo effect was due to patients being aware that previous studies with the drug had recorded positive effects.

Dr Gabrielle Macaulay, a GP who treats hundreds of patients with coughs every year, told the BBC the new treatment could help transform the lives of those suffering.

"Within a robust diagnostic and treatment pathway, this new medicine may have a life-changing impact on the individual people affected by this condition."

However, she warned of its potentially harmful impact if it were to be prescribed instead of more suitable medicines.

"The wider issue is how will this medicine be used appropriately for patients who do not have another treatable cause for their cough," she said.

"There is a risk that this medicine could be over-prescribed for conditions where an alternative treatment could lead to a more favourable outcome."

The study was funded by the company responsible for developing the drug but Dr Macaulay suggested the methodology used was the "gold standard" for preventing bias.

Anyone with a cough that has lasted for three weeks or more should see a doctor, according to experts.

Long-lasting coughs can indicate a number of health problems, including chronic obstructive pulmonary disease, which affects millions of people in the UK, or even cancer.

Lung cancer claims 35,300 lives a year in the UK according to Cancer Research UK, partly because it is often diagnosed late.

The main symptom is a chronic cough - although most instances of this will not be due to cancer.