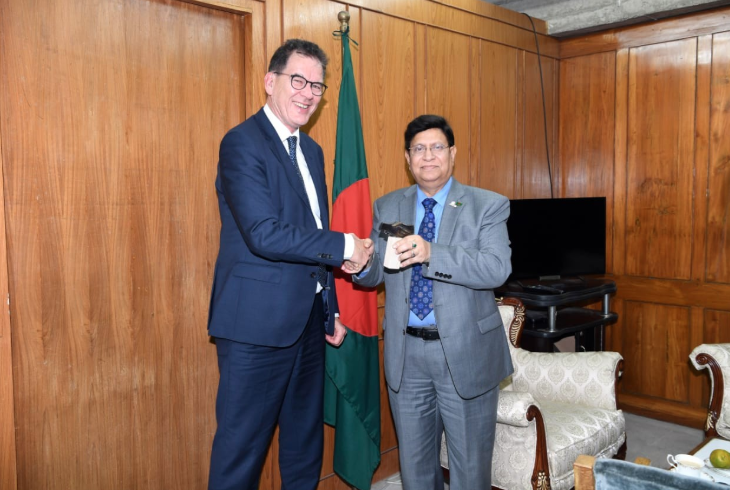 German Minister for Economic Cooperation and Development Dr Gerd Muller on Tuesday expressed his country’s firm commitment to a sustainable solution to the Rohingya crisis and Myanmar’s full compliance with the recent order of the International Court of Justice (ICJ).

Muller is scheduled to visit Rohingya camps in Cox’s Bazar on Wednesday to see the situation on the ground.

Momen requested Muller to consider meaningful measures compelling Myanmar for creating a conducive environment in Rakhine for safe, dignified and sustainable return of the forcibly displaced Rohingys, said the Ministry of Foreign Affairs.

Bangladesh has been hosting more than 1.1 million Rohingyas. Most of them fled their homes in Rakhine state when the Myanmar military and their collaborators launched a brutal offensive targeting the mainly-Muslim ethnic minority.

State-sponsored discrimination stretches back decades against Rohingyas who are denied citizenship by Myanmar despite having lived in the country for generations.

During the meeting, Foreign Minister Momen highlighted Bangladesh’s tremendous socio-economic developments, particularly during the last one decade in line with Prime Minister Sheikh Hasina’s Vision 2021 and Vision 2041 that envisages the transformation of Bangladesh into ‘Sonar Bangla’ or Golden Bengal as dreamt by Father of the Nation Bangabandhu Sheikh Mujibur Rahman.

He informed the visiting German Minister about the year-long celebration of the birth centenary of Bangabandhu, commencing on March 17, and reiterated Prime Minister Hasina’s invitation to German Chancellor Angela Merkel to join the celebration.

He also suggested that giant German motor vehicle manufacturers like BMW can build assembling plants in Bangladesh, which was appreciated by the German Minister.

The issue of climate change also figured prominently in the meeting.

While Muller highlighted German development cooperation’s particular focus on this area, Momen apprised him about Bangladesh’s various adaptation and mitigation efforts, including construction of cyclone shelters and embankments and other disaster preparedness.

The German Minister for Economic Cooperation and Development is visiting Bangladesh at the invitation of Bangladesh Foreign Minister. Dr Momen visited Berlin in October last year when he met, among others, Minister Muller.

Germany is the largest trading partner of Bangladesh in Europe and the second largest globally.

The German Minister and his delegation came to Dhaka by a special flight of German Air Force on Monday evening.

They will leave for India on Wednesday afternoon after visiting Rohingya camp.