Nice memories but no trade deal for Trump in India 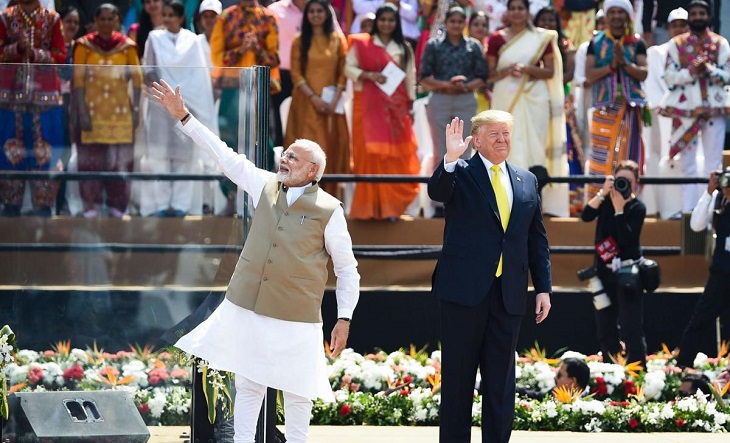 US President Donald Trump failed Tuesday to strike a trade deal with India at the end of a visit big on photo opportunities but short on substance and overshadowed by deadly riots.

US-Indian trade relations have worsened in recent years as Trump's "America First" aim of reducing deficits has collided with the "Make in India" mantra of Prime Minister Narendra Modi.

Speaking at the end of a short tour that saw him hold hands at the Taj Mahal with First Lady Melania and address a huge rally, Trump said only that they had made "tremendous progress" towards an accord.

"The United States has to be treated fairly and India understands that," he told a news conference, saying that "if a deal happens with India, it will be towards the end of the year."

While minor compared to his battle with China, Trump has imposed tariffs on Indian steel and aluminium and suspended duty-free access for certain goods in an effort to cut the $25 billion US trade deficit with Asia's third-biggest economy.

Under pressure to deliver ahead of his November reelection battle, Trump has pressed for greater access to the vast Indian market of 1.3 billion people for US dairy producers and makers of medical goods.

But Modi, battling to fire up a slowing economy hampered by inflation and a widening budget deficit, has responded with higher tariffs on US goods including $600 million worth of Californian almonds.

Arriving on Monday Trump hailed India and its "tremendously successful" but "very, very tough" Modi at the rally of about 100,000 people inside the world's largest cricket stadium in Modi's home state Gujarat.

The fanfare of the "Namaste Trump" event was recompense for a "Howdy Modi" extravaganza in Houston last year when the two leaders held hands and Trump compared the Indian leader to Elvis Presley.

The pair did announce $3 billion in defence deals, including for the sale of naval helicopters, proof of their deepening strategic alliance to counter the rise of China in the region.

But behind the bonhomie they remain far apart on a trade deal between the world's biggest economy and its second most populous nation, dashing earlier speculation of a possible partial compromise that would have seen India lowering tariffs on Harley-Davidson motorcycles and other items.

"Harley-Davidson has to pay tremendous tariffs when they send motorcycles in here. When India sells motorcycles into the US there is virtually no tariff... That's unfair," Trump told a news conference.

Trump stopped short of publicly voicing unease about a new citizenship law that has raised concerns abroad, including in Washington, about the direction of India under Modi.

Critics say the law forms part of a plan to remould secular India as a Hindu nation -- something Modi denies -- and its recent passage sparked weeks of protests and violence, including in Delhi on Monday and Tuesday.

A standoff between supporters and opponents of the law degenerated into running battles between Hindus and Muslims on the northeastern fringes of the megacity of 20 million people, leaving at least 13 dead and 150 injured.