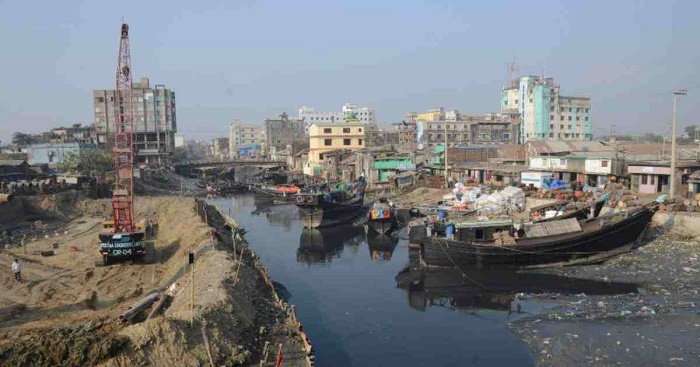 The government has planned to formulate the third master plan to prevent the encroachment and pollution of the country’s five rivers -- Padma, Meghna, Turag and Pungli -- and increase their navigability.

“At a meeting at the secretariat on February 16, a committee led by the Principal Secretary was formed for formulating the third master plan. The meeting also worked out the framework of the plan,” Local Government and Rural Development (LGRD) Minister Md Tazul Islam told UNB in an interview.

Earlier, the government formulated the first master plan to restore the navigability and check the pollution of the rivers surrounding Dhaka, including Buriganga, Dhaleswari, Balu and Shitalakshya, and the Karnaphuli River in Chattogram.

A 25-member committee was formed on December 5, 2016 which formulated two master plans and those were approved by the Prime Minister, said the minister.

Tazul Islam said the government has a plan to free all the rivers across the country from encroachers, prevent pollution and restore their navigability within 10 years.

Under the third master plan, short-, middle- and long-term projects will be implemented to save the rivers.

The minister said a decision has been taken to evict establishments from occupied canals and rivers. The work, as per the third master plan, will begin soon.

He said the eviction of establishments and structures from canals and their renovation work have already started in Dhaka while the government is taking steps so that encroachers cannot reoccupy those.

“Rajuk, Wasa and Local Government Division are working together to check the pollution of rivers and canals and stop their encroachment. City dwellers will soon get the benefits,” said Tazul.

“We’ve started monitoring to check the encroachment and pollution of the Padma, Meghna, Turag and Pungli rivers,” he added.

Stressing the need for creating awareness among people over protecting rivers, he said the committee will take effective measures to prevent river pollution through awareness building in society.

“Most river encroachers are influential people, but they won’t be spared, no matter how powerful they are,” said the minister.

The committee will work and monitor so that wastes and trashes cannot be dumped into the rivers, said Tazul Islam adding that there will be river dredging alongside building walkways on both sides of those.

Asked how much time will be required to make the rivers around Dhaka, including the Buriganga, pollution-free, he said there are many industries and factories surrounding the Buriganga. Besides, domestic wastes are also dumped into the river. “The government is working on it and it will take a bit longer time.”

The minister said it took 50 years to bring back the navigability of the Thames River in London and 40 years for Shanghai River in China. “So, we’re working with a long-term plan and will get the positive results.”

In a historic verdict, the High Court on January 30 last year declared the Turag River as a legal/juristic person or a living being to save it from encroachment.

On July 1 last year, the High Court observed that Bangladesh’s existence depends on river protection. “The country will survive, the beloved Bangladesh will survive if its rivers are protected,” it said.

The HC bench of Justice Moyeenul Islam Chowdhury and Justice M Ashraful Kamal came up with the observations in the full verdict declaring the Turag River as a legal/juristic person or a living being to save it from encroachment.

In the full verdict, the court said all the rivers flowing in and through Bangladesh will get the same status. It declared the National River Conservation Commission as the legal guardian of the rivers.