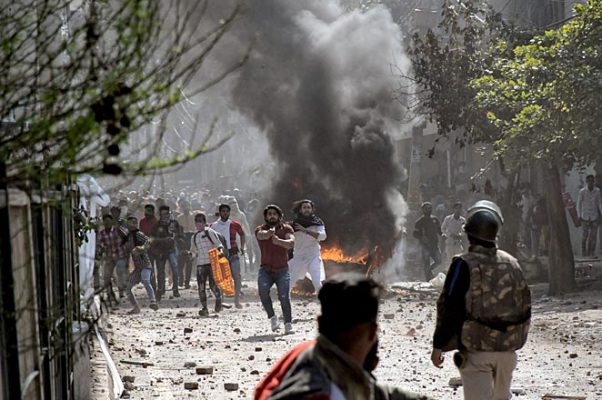 Smoke billowed in the air and mobs roamed unchecked through the streets, burning shops, pelting stones and threatening locals, as fresh violence tore through northeast Delhi, killing twelve more people on Tuesday and taking the toll in the communal clashes over the amended citizenship law to 19.

All private and government schools in Northeast Delhi will remain closed on Wednesday and CBSE board exams scheduled in centres in the areas postponed.

The CBSE said it took the decision "based on the request of the Directorate of Education and the government of Delhi and to avoid inconvenience to students, staff and parents".

As tension smouldered in the national capital's northeast and the sunset over another restive day, violence cut a swathe through several localities, including Chand Bagh and Bhajanpura, with stones and other missiles hurled and shops set ablaze.

Rioters damaged two fire tenders in Gokulpuri and crowds raising incendiary slogans set on fire fruit carts, rickshaws and anything that came in their way in the epicentre of the trouble Maujpur and other places.

With US President Donald Trump also in the city, Delhi Police ramped up security. It fired teargas shells to disperse the rioters -- armed with stones, rods and even swords and many wearing helmets to protect themselves -- and was assisted by paramilitary personnel.

Streets were littered with mangled remains of vehicles, bricks and burnt tyres, mute testimony to the violence and bloodshed that took on a communal taint on Monday and injured about 180 people, including 48 police personnel.

According to GTB Hospital Medical Superintendent Sunil Kumar, six people were declared brought dead on Tuesday, taking the death toll in 13. At least 35 injured people were also taken to the hospital today.

"Fifty per cent of those injured have sustained bullet injuries," Kumar added.

As the violence continued unabated, police officials said the situation was under control and flag marches were conducted in Bhajanpura, Khajuri Khas and other places.

The meeting resolved that workers of political parties should join hands to restore peace and peace committees should be reactivated in all localities.

In scenes not seen in the national capital for decades, frenzied groups thrashed people on the road and vandalised vehicles.

The media also came under attack.