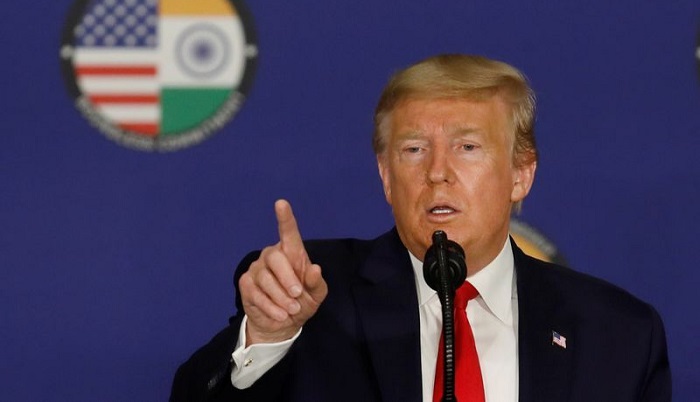 US President Donald Trump has launched a verbal offensive against two left-leaning Supreme Court judges, urging them to step aside from all "Trump-related" cases due to supposed bias.

The country's highest court will hear a case on March 31 in which Trump's lawyers will argue against his tax returns being released -- a sensitive subject in the run-up to November's presidential election.

In a tweet late Monday, he repeated allegations by a Fox News commentator that Sotomayor had reportedly accused her more conservative colleagues of favoring Trump.

"This is a terrible thing to say. Trying to 'shame' some into voting her way?" he wrote about Sotomayor.

"She never criticized Justice Ginsburg when she called me a 'faker'. Both should recuse themselves on all Trump, or Trump related, matters."

At a press conference Tuesday during a visit to India, Trump doubled down.

"I always thought that, frankly, justice Ginsburg should (recuse herself) because she went wild during the campaign," he said.

"Perhaps she was for Hillary Clinton if you can believe it. But she said some things that were obviously very inappropriate."

During the 2016 presidential campaign, Ginsburg called Trump a "faker" and noted he "really has an ego" -- remarks she later said she regretted.

Trump's criticism was triggered by Sotomayor's written dissent last week in a Supreme Court split-decision on a lower court ruling about immigrants' access to benefits.

In her dissent, Sotomayor wrote it was "hard to say what is more troubling: that the government would seek this extraordinary relief seemingly as a matter of course, or that the court would grant it."

"I fear that this disparity in treatment erodes the fair and balanced decision-making process that this court must strive to protect."

Trump took umbrage, saying it was "a terrible statement for a Supreme Court justice" to make.

She "accuses the majority of wrongly tipping the scales for emergency relief in favor of the federal government -- not of pro-Trump bias," said University of Texas law professor Stephen Vladeck.

Vladeck has calculated that Trump's administration has filed more than 20 emergency appeals to the Supreme Court while a case was still in lower courts -- only eight such appeals were filed in the 16 years before he came to office.

The court has undergone a marked shift to the right under Trump, who has filled two vacancies with conservative-leaning judges -- tilting the balance of the nine-member court to the right.