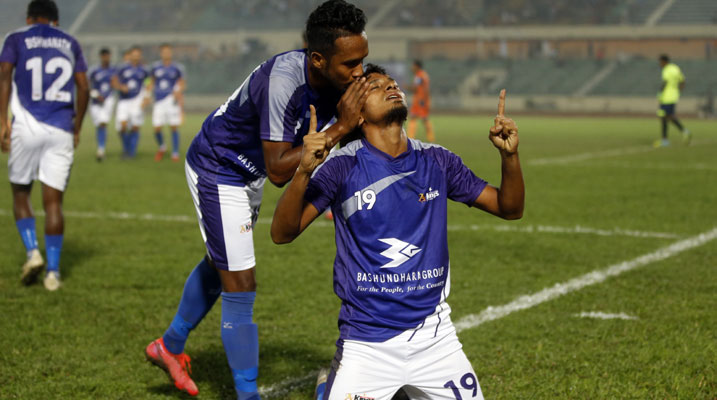 The big-budgeted team made a good start in the ongoing league beating Bangladesh Championship League (BCL) Runners-up Uttar Baridhara Sporting Club by 1-0 goal in the opening match, but played out 1-1 draw with newcomers Bangladesh Police Football Club in the second match. With the day’s feat, Kings secured total of seven points with two wins and one draw from three matches.

The BPL Champions made several changes in the squad ahead of the game. Defender Yeasin Khan, who got suspended in the last match, returned alongwith Midfielder Biplu Ahmed and Forward Alamgir Kabir Rana.

After the half time, Captain Colindres made it 3-0 with a brilliant right-footer shot from nearer the box, off a pass from Midfielder Biplo Ahmed in the 47th minute.

But, Brothers, which played out identical 1-1 draw against Sheikh Russel Krira Chakra and BPL Runners-up Dhaka Abahani Limited in their first matches, gave a tough fight against Kings.

Coming from 0-3 goals behind, Nigerian Forward Kingsley netted their first goal for Brothers with a left-footer shot utilizing a pass from Mobarak Hossain in the 63rd minute.

Kings got another blow while Midfielder Arup reduced the margin 3-2 with an amazing conter-attack, off a pass from Midfielder Shakil Ahmed.