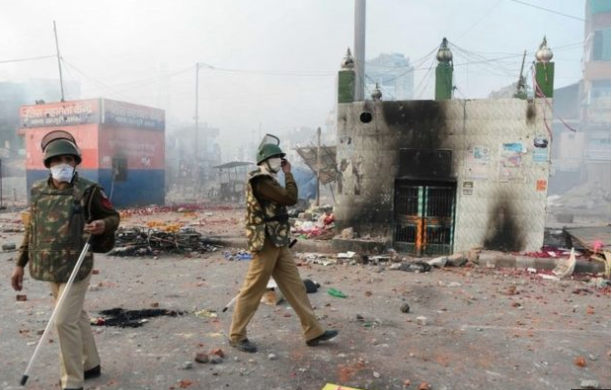 Ten people have been killed in Delhi amid clashes over a controversial new Indian citizenship law during US President Donald Trump's first official visit to the country.

This is the deadliest violence the Indian capital has seen in decades.

The clashes first broke out on Sunday, ostensibly between protesters in favour of the law and those against it.

But they have since taken on religious overtones, with Hindu and Muslim mobs clashing violently.

The clashes are happening in Muslim-majority neighbourhoods in north-east Delhi - about 18km (11 miles) from the heart of the capital, where Mr Trump has been holding meetings with Indian leaders, diplomats and businessmen.

The Citizenship Amendment Act (CAA) - which critics say is anti-Muslim - has sparked massive protests since it was passed last year, and some of those have turned violent. But the demonstrations in Delhi have been peaceful until now.

When asked about the violence during a press briefing, Mr Trump evaded the issue, saying that although he had "heard about it," the incident was "up to India" to handle.

However, he said he had brought up the issue of religious freedom in the country and was impressed by the government's response.

Correspondents say the current unrest is an embarrassment to Prime Minister Narendra Modi as it has taken the spotlight away from Mr Trump's visit.

Further clashes are feared, say BBC reporters in the area. They saw mobs throwing stones and shouting slogans, with some in the crowd shouting "shoot the traitors".

"We have seen a tyre market that's been set on fire, plumes of smoke are coming up. Journalists, including us, are being heckled and warned against filming," our correspondent Yogita Limaye says.