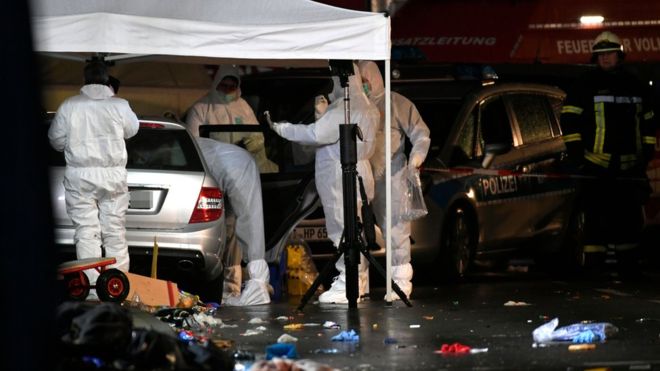 The number of people confirmed as injured after a car ploughed into a carnival crowd in western Germany has risen to 52, police say.

Eighteen of those hurt in Monday's incident are children. In total 35 people remain in hospital.

Frankfurt's general prosecutor's office announced that the victims were aged between two and 85 years old.

A 29-year-old German citizen was arrested on suspicion of attempted homicide in the town of Volkmarsen.

The motive is unclear. Planned carnival events are to be held in Hesse state, where the town is located, on Tuesday.

A statement by Hesse police said there were no "concrete indications" the risk had increased at these processions, although police warn security arrangements could be reviewed.

Police have also arrested a second person for allegedly filming the incident, the statement said.

Authorities cautioned against sharing images of the incident after one picture circulated online claimed to show the driver being arrested, but in fact showed a different person.

The incident took place during celebrations for Rosenmontag, or Rose Monday - a carnival day celebrated in some parts of Germany, Austria, Belgium and Switzerland.

A silver Mercedes drove through plastic barricades set up for the parade and into a group of people at about 14:45 local time (13:45 GMT).

Eyewitnesses told German media that driver had accelerated toward the crowd and appeared to target children.

Police said they believed it was an attack but that there was no indication of a political motive, according to Bild newspaper.

The Frankfurt prosecutor's office said the suspect was being treated for injuries sustained in the incident, but would later be brought before an investigating judge.

On Tuesday, authorities dismissed reports that the driver was drunk at the time, although it remains unclear whether he was under the influence of drugs.

Steffen Roettger said his two daughters were at the parade and called him after the incident happened. "My 10-year-old was pulled aside and only narrowly avoided being hit," he told broadcaster NTV.

He said his daughter was "in shock" after seeing people "lying around everywhere".

Police have set up a portal for people to submit pictures or videos of the incident. They have also created an information centre for anyone affected at the town hall.

Hesse state leader Volker Bouffier said he was "shocked at the terrible act".

In a statement, he shared his condolences with the victims and their families, while urging people not to speculate about possible motives.

German Chancellor Angela Merkel said her thoughts were with those injured and their relatives.