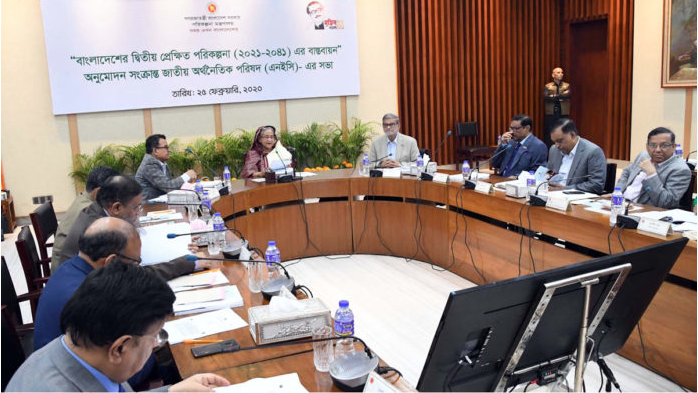 The National Economic Council (NEC) approved on Tuesday the country’s second Perspective Plan for the year 2021-2041 in a bid to turn Bangladesh as a higher mid-income country by 2031 and a higher income and developed country by 2041.

The approval came from the NEC meeting held at the NEC Conference Room with its Chairperson and Prime Minister Sheikh Hasina in the chair.

The implementation of the country’s first Perspective Plan (2010-2021) is nearing completion.

Briefing the reporters after the meeting, Planning Minister MA Mannan said the meeting approved this historic outline document for the next 20 years based on four institutional pillars which are governance, democratization, decentralization and capacity building.

According to this long-term plan projects, the country’s per capita income on current price would stand at US$12,500 by 2041.

It said the country’s GDP growth rate in 2031 is expected to reach nine percent growth while it would further expect to grow at 9.9 percent in 2041.

The poverty rate is projected to come down at seven percent in 2031 and further at below three percent in 2041.

Major goals of the mega plan are to eliminate extreme poverty by 2031 and to bring down the poverty rate below three percent by 2041.

It also aims to ensure industrialization and structural transformation as well as exemplary change in the agriculture sector and export-oriented economy.

The Planning Minister said although the NEC today gave approval to this final document of the Perspective Plan, the Ministries and Divisions would be able to give their further inputs within the next one month and thus those would be in incorporated.