Road in Bashundhara named after Japan 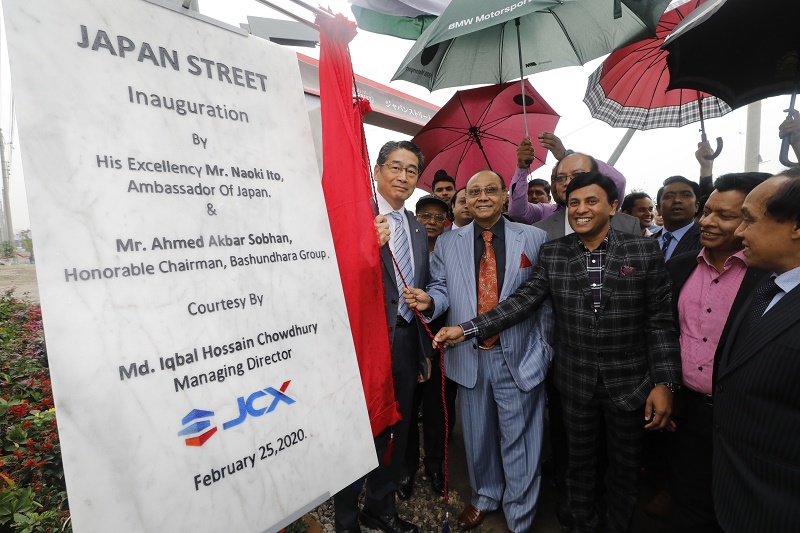 A prominent road in the capital’s Bashundhara Residential Area was named after Japan on Tuesday as a mark of respect for the country.

In Bangladesh, this is for the first time a road was named after the country’s largest development partner, Japan.

Chairman of Bashundhara Group Ahmed Akbar Sobhan and Ambassador of Japan to Bangladesh Naoki Ito jointly inaugurated the “Japan Street”, the newly constructed road in Bashundhara, Block-I amid cheers and applause from the residents and a large number of dignitaries in the afternoon.

“As far as I know, there is no road named after Japan in this country. This is for the first time a street is named after Japan. I am very happy and feel honoured with this wonderful gesture,” said the Japanese Ambassador after the inauguration.

Later, speaking to a gathering of the dignitaries, the Bashundhara Chairman said Japan is the greatest friend of Bangladesh for the last 50 years and “we hope Japan will remain our greatest friend forever.”

Talking about the prospect of the real estate sector, he said, “We are very happy because our Prime Minister Sheikh Hasina has given loan facilities to more than 1.4 million government officers at 5 percent interest rate and repayment in 20 years. This is an ample opportunity to invest in the real estate sector.”

He lauded the government for taking appropriate policy to grow investment and business in the country.

He said Bashundhara is the country’s only residential area where nobody will find any indiscipline, irregularities and any kind of disturbance.

“But a section of people are not happy with this clam and discipline as none is allowed here to create any nuisance. We are serious about safety and security of the residents living in Bashundhara,” he said.

Ahmed Akbar Sobhan requested the Japanese Ambassador to take an initiative to invest in real estate sector, particularly targeting the 1.4 million government officials, who are getting loan at 5 percent interest rate with 20 years term.

He suggested that the Japanese Ambassador pursue JICA to come forward to invest in the real estate sector, which will be helpful for sustainable growth in Bangladesh. He said JICA is investing in many infrastructure projects in Bangladesh like Japanese economic zone. “Japan is a great partner of Bangladesh’s socio-economic development.”

The Bashundhara Group Chairman said he does not usually participate in any inaugural session, but when he heard about Japan he became expressed his interest.

He invited the Japanese investors to come and make investment in Bashundhara and his company will extend all-out support to make their initiatives a complete success.

The Chairman further said the middle income group of Bangladesh is very much interested in apartment life and there is a big demand for apartment.

Ahmed Akbar Sobhan also invited the Japanese Ambassador to come every morning at Bashundhara and walk along the Japan Street. ‘It’s your street,” he told Ambassador Naoki Ito.

In response to Bashundhara Group Chairman’s remarks, the Japanese envoy assured him that he would pursue the Japanese investor to invest here for the benefit of both the countries.