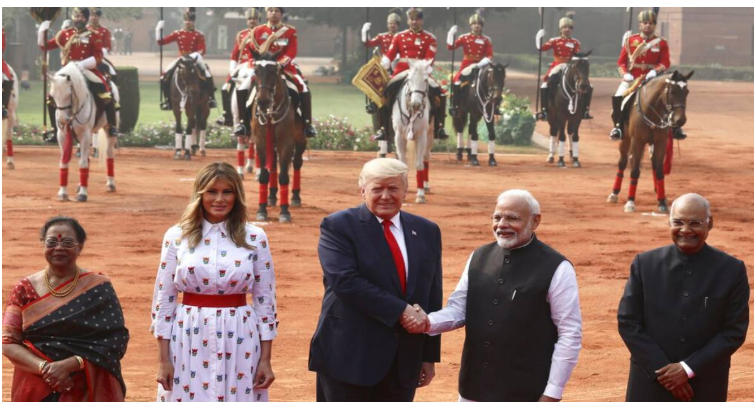 President Donald Trump is calling his trip to India "unforgettable," "extraordinary" and an expression of "love" as he delivers a joint statement with Indian Prime Minister Narendra Modi following their bilateral talks.

Trump announced that India has signed a deal to purchase more than $3 billion of advanced military equipment, including helicopters. And he says the two leaders made progress on what he describes as a "comprehensive trade deal" after talks.

Trump also says he and first lady Melania Trump "have been awed by the majesty of India" and will "always remember the magnificent welcome" they received upon their arrival.

Modi, meanwhile, says the two had a productive exchange on issues including defense cooperation, energy and technology and said talks will continue.

He says that he and Trump have now met five times over the past eight months and said ties between the two nations is the "most important partnership of the 21st century."

Trump joked Tuesday that the thousands of people who joined the two leaders Monday at a huge stadium where there more for Modi than himself. Modi was re-elected with a huge mandate, leading his Hindu nationalist party to a massive victory in the 2019 election.

Speaking at Hyderabad House in New Delhi, Trump said that "every time" he mentioned Modi's name there were cheers, "so they love you in India and that's a good thing."

On the second day of his whirlwind trip, Trump described his visit as "amazing in every sense of the word." And he says progresses is being made on trade, fighter jet purchases and energy.

The two scooped handfuls of the petals— Trump with gusto — their shoes off in a sign of respect. The memorial is at Raj Ghat where the famed independence leader was cremated after his assassination in 1948.

Trump also signed a guest book and was presented with a bust of Gandhi as Indian music played on a loudspeaker.

They ended the visit planting a tree at the site.

President Donald Trump is kicking off his second day in India with an elaborate outdoor welcome ceremony in front of the grand Rashtrapati Bhavan Presidential Palace in New Delhi.

The president's armored car, nicknamed "The Beast," was welcomed with cannon fire and accompanied by a parade of colorfully-dressed soldiers on horseback as it arrived at the palace. The welcome ceremony included hundreds of military officials, marching with instruments and swords.

Trump and Indian Prime Minister Narendra Modi are expected to talk trade and other issues Tuesday as the president's two-day visit to the subcontinent delves into substance after opening with a heavy dose of pomp and pageantry.

The jam-packed day will include a joint statement with Modi, meetings with business leaders and embassy official, a press conference and a state dinner.