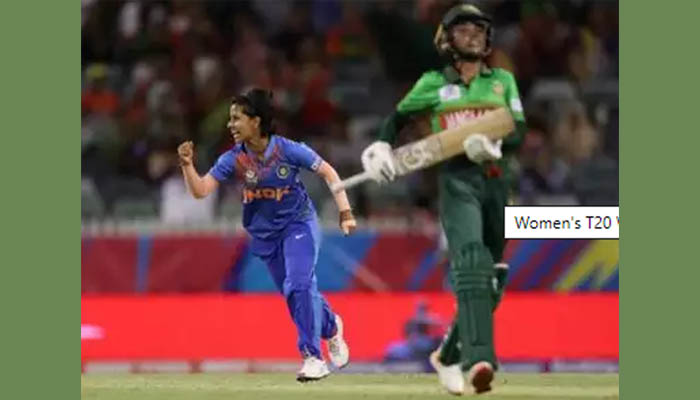 Despite a good preparation camp right before the main event, Bangladesh National Women’s Cricket team made a disappointing start in the ICC Women’s T20 World Cup losing to India by 18 runs in the Australian city of Perth on Monday.

In their first group match, Bangladesh won the toss and opted to bowl first. They restricted India in 142 for 6 in 20 overs.

While chasing, Indian bowlers led by leg-spinner Poonam Yadav restricted Bangladesh to 124-8 and won the match by 18 runs.

Bangladesh faced an initial debacle when Indian Shikha Pandey removed Shamima Sultana for three. In the second wicket stand, Murshida Khatun and Sanjida Khatun added 39 runs on the board.

But Arundhati Reddy scalped the wicket of Murshida for 30 off 26 balls with four fours and the Tigress were never able to back to the race.

Bangladesh’s highest run came from the willow of wicketkeeper-batter Nigar Sultana who made 35 off 26 with five fours.

As long as she was in the crease, Bangladesh was in the match for a stunning victory but she was undone by a Rajeshwari Gayakwad delivery.

Her effort went in vain as the other batters were not able to replicate the same effort in the wicket.

Fahima Khatun, Jahanra Alam and Rumana Ahmed posted 17, 10 and 13 respectively, but these efforts were not enough to chase the target.

Opener Murshida Khatun was the other notable scorer for Bangladesh with 30.

Eventually, Bangladesh ended on 124 for eight in 20 overs and lost their first game of the event by 18 runs.

Poonam however showed an intriguing display of googly to wreck-havoc on Bangladesh’s middle order that saw her claimed 3-18 in four overs. She was ably supported by Shikha Pandey and Arundhati Reddy who picked up two wickets apiece.

But India hit back in style through Shafali Verma and Jemimah Rodrigues, who gave the scoreboard a rapid pace and shared 37-run.

Verma was at her attacking best, hitting 39 off just 17, with two fours and four sixes.

After Panna Ghosh dismissed Verma, Bangladesh started hurling the baton with some quick wickets. They also fielded well and inflicted two run outs including Rodrigues who threatened for a bigger thing. She was out on 34.

After a middle order collapse, India regrouped well at the death overs, thanks to Veda Krishnamurthy who blasted 20 off 9 with four boundaries to help the side propel past 140.

Both Panna and Salma conceded 25 runs in four overs to claim two wickets each.

However, Bangladesh failed to display a performance what they have done in the Asia Cup’2018 when they beat India in two consecutive games to clinch the title.

India in their first match beat hosts Australia by 17 runs.