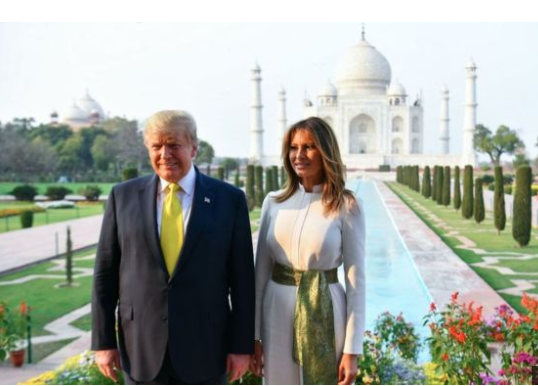 US President Donald Trump and his wife Melania have visited the Taj Mahal on the first day of their trip to India.

The iconic "monument to love" was the second stop in a 36-hour official visit, Mr Trump's first to India.

Earlier in the day he landed in Gujarat, home state of Prime Minister Narendra Modi, who greeted him along with tens of thousands of Indians.

The leaders of the world's two largest democracies will meet on Tuesday. No big deals are expected to be signed.

Mr Trump received a colourful welcome in the northern city of Agra, which included dancers dressed as peacocks and horses.

While Mr Modi was not present, he was greeted by a close ally of his, Yogi Adityanath, the chief minister of Uttar Pradesh state, where Agra is located.

The Trumps then left for the Taj Mahal, a 17th Century marble mausoleum built by Mughal emperor Shah Jahan in memory of his queen, Mumtaz Mahal.

It is perhaps India's most famous monument and is usually part of every visiting dignitary's itinerary.

"Namaste," he began to thunderous applause, before going on to refer to several Indian icons, from history to cricket to Bollywood.

"India will always hold a very special place in our hearts," he added.

He also had words of praise for Mr Modi: "Everybody loves him but I will tell you this, he is very tough. You are not just the pride of Gujarat, you are living proof that with hard work, Indians can accomplish anything they want."

However, he struggled to pronounce several Indian words - from Ahmedabad, the city where he was speaking, to Swami Vivekananda, an Indian philosopher, greatly admired by Mr Modi. He also called the Vedas - ancient Hindu texts - "Vestas".

He ended his speech by saying: "God bless India, God bless the United States of America - we love you, we love you very much." He spoke after Mr Modi, and the BBC's Rajini Vaidyanathan says crowds began leaving mid-way through the US president's speech.