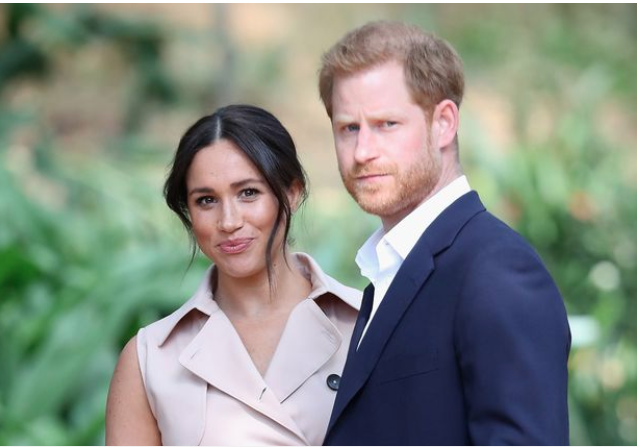 Prince Harry and Meghan Markle have been accused of making a disrespectful "snipe" at the Queen in their bombshell statement.
The couple shared an extraordinary post on Instagram on Friday, hinting at the tense negotiations over their the "revised role" once they quit the royal family.
They also appear to hit out at other royals being allowed to seek outside employment.
Critics have accused Harry and Meghan of aiming a "swipe" at the monarch in the statement, in which they said they would legally be allowed to describe themselves as 'Royal' overseas.
Although they said they will not using their Sussex Royal branding, pointing out that they could legally continue to do so has jarred with palace insiders, according to reports.
Speaking on Sky News this morning, royal biographer Angela Levin said that the Queen would be saddened by the latest statement, which she branded "spiteful and petulant".
"The Queen didn't want to ostracise him," Ms Levin told Kay Burley. "She wrote that she loved them and wanted them to be in the family.
"They seem to take no notice of that, and just look for the dark side, looking at what they've missed out on."
One statement in the couple's statement points out that other royals have been allowed to earn money through outside work - believed to be a barbed reference to Princess Eugenie and Beatrice.

Harry and Meghan wrote: "While there is precedent for other titled members of the Royal Family to seek employment outside of the institution, for The Duke and Duchess of Sussex, a 12-month review period has been put in place."
A source told the Daily Mail: "It was their decision to do this and the family is clearly trying their best to facilitate it.

"But it inevitably requires sacrifices on both sides and the Sussexes need to be rather more gracious about it.
"Sniping from the sidelines doesn't help anyone."
Royal commentator Richard Fitzwilliams, a former Editor of International Who's Who, added: "It has been especially unnecessary to underline it in this way, especially as the agreement will be reviewed after a year.
"It simply empathises the division that we know that's there. The tone they've taken is that they are unhappy, they've made it clear every step of the way."
Reports in the US suggested Meghan had told pals there was 'nothing legally stopping them' from using Sussex Royal despite the Queen's ban.

The Queen called on her senior legal advisers to outline the case enshrined in UK law banning the use of the word “royal” for financial gain, prompting their latest bombshell statement.
It means they cannot use Sussex Royal on merchandising, despite having already spent thousands on doing just that on a range of goods from T-shirts to bandanas and literature.