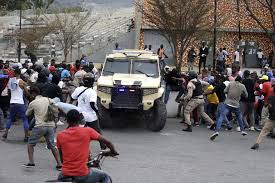 The army's high command said in a statement that a group of policemen opened fire on the army's headquarters, killing one soldier and injuring another, who was hospitalized.

A police officer was also killed in the gunfight and at least eight people including three civilians and five officers were injured, a spokesman for the Bernard Mevs Hospital told local media.

The Haitian government has announced the cancellation of scheduled carnival celebrations for a festival that sought to restore a sense of normalcy in the country.

Haiti has witnessed several protests that police officers have organized since the end of last year as the poor country struggles with a prolonged economic and political crisis.