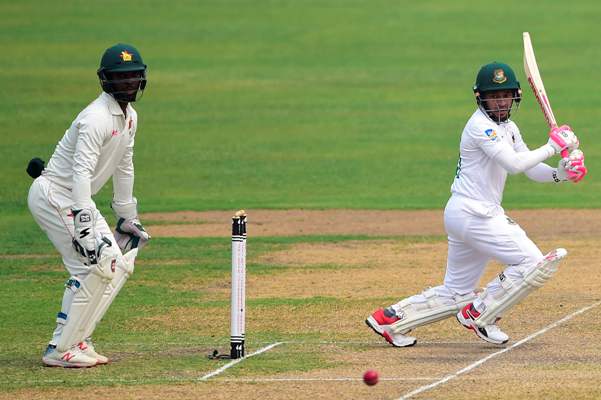 Mushfiqur Rahim joined skipper Mominul Haque as the second centurion of the day as Bangladesh built a big lead over Zimbabwe in the one-off Test on Monday.

Bangladesh reached 442 for five at tea on day three to stretch their first-innings lead to 177 in Dhaka.

Mushfiqur remained unbeaten on 143 while Mominul, who reached his first hundred as Test captain in the first session, made 132 as the pair added 222 for the fourth wicket after Bangladesh resumed on 240 for three.

Ainsley Ndlovu took a brilliant reflex catch off his own bowling to dismiss Mominul for Zimbabwe's first success of the day as the Bangladesh captain departed an hour into the second session.

Mominul had earlier brought up his ninth Test hundred off 156 balls, joining teammate Tamim Iqbal as Bangladesh's most prolific century-makers in the five-day format.

Mominul, unbeaten on 79 overnight, struck 14 fours in his 234-ball innings -- his first hundred since becoming Bangladesh Test captain in November.

Mushfiqur, who resumed on 32, was one run short of his century at lunch but did not take much time after the break to bring up his hundred, cutting Ndlovu for a boundary through cover point.

But Ndlovu removed Mohammad Mithun for 17 to give Zimbabwe hope and slow the Bangladeshi scoring rate.

Mithun got a bottom edge as he tried to cut Ndlovu as wicketkeeper Regis Chakabva took his fourth catch of the innings.

Wicketkeeper-batsman Liton Das was on nine as he accompanies Mushfiqur, who has hit 23 fours so far.