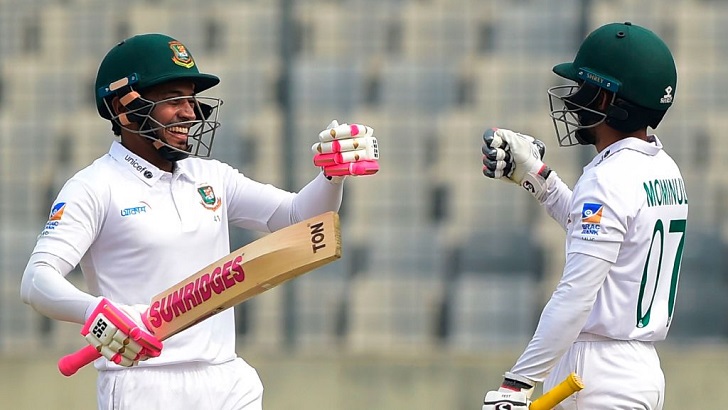 Mominul Haque completed his first century as Bangladesh Test captain and Mushfiqur Rahim was one run off his ton as the hosts took a first-innings lead against Zimbabwe on Monday.

Mominul hit 119 not out and Mushfiqur was unbeaten on 99 as Bangladesh reached 351 for three by lunch on the third day of the one-off Test in Dhaka. The hosts lead by 86 runs in response to Zimbabwe's 265.

Resuming the day on 240-3, Mominul and Mushfiqur dominated the Zimbabwe bowlers to add 111 runs in the opening session and stretch their unbroken fourth-wicket stand to 179.

Mominul hit pacer Donald Tiripano to the mid-off boundary to bring up his ninth Test hundred off 156 balls, joining teammate Tamim Iqbal as Bangladesh's most prolific century-makers in the five-day format.

Mominul, unbeaten on 79 overnight, has struck 13 fours so far in his innings, which is also his first hundred since becoming Bangladesh Test captain in November.

Mushfiqur, who resumed on 32, was the more aggressive batsman with 17 boundaries as Bangladesh eased past Zimbabwe's first-innings total.