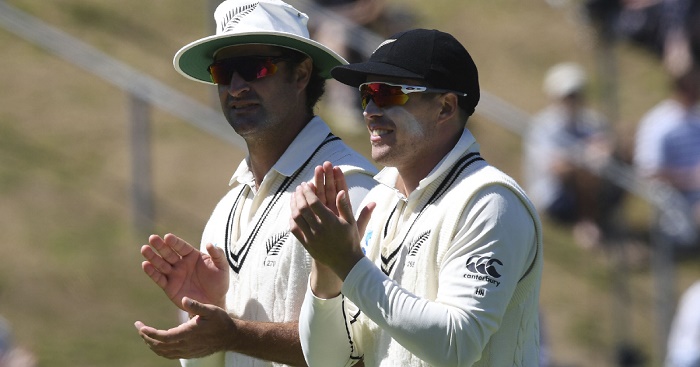 New Zealand has beaten top-ranked India by 10 wickets in the series-opening match, posting its 100th win in tests and inflicting India's first loss in eight matches in the ICC Test Championship.

India started play Monday at 144-4, 39 runs behind New Zealand after trailing by 183 on the first innings, and was dismissed for 191, a lead of only eight runs. Trent Boult took 4-39 and Tim Southee snared 5-61, his 10th five-wicket haul in tests.

Southee completed match figures of 9-110, making a strong statement after his omission from the third test against Australia in January.

New Zealand knocked off the winning runs in just eight balls before lunch, finishing 9-0 with Tom Latham on 7 and Tom Blundell on 2.

The win marked a massive turnaround for New Zealand after its humbling 3-0 series loss in Australia in December and January. Back on home soil, New Zealand showed some of the form that lifted it to No. 2 in the world test rankings prior to the Australian series.

"It was an outstanding effort over the space of four days," New Zealand captain Kane Williamson said. "We know how strong this Indian team is all round the world.

"The efforts that went into that first innings, to put the ball in the right areas for long periods of time (were crucial), and I think with the bat to get what was a very competitive total on a surface that I thought was a very good one, that offered right throughout the match."

Boult and Southee know how to make the best of New Zealand conditions and they were able to do so when Williamson won an influential toss on Friday and opted to make first use of the ball. India's powerful batting lineup struggled on a greenish pitch, it was bowled out for 165 and New Zealand took a grip on the match that it didn't release.

Williamson made 89 as New Zealand scored 348 in its first innings, building a commanding lead. It looked likely to be in an even stronger position when it passed India's total with only two wickets down but needed late order contributions from Colin de Grandhomme (43), Kyle Jamieson (44) and Boult (38) to achieve a substantial total.

New Zealand then took a major step towards victory when it removed Prithvi Shaw (14), Mayank Agarawal (58), Cheteshwar Pujara (11) and captain Virat Kohli (19) before stumps on Sunday, with Boult claiming three of those wickets,

Conditions in the second innings differed from the first. On the first day the ball seamed a little on a moist pitch and swung a little in heavily overcast condition.

By Monday the pitch had dried, hardened and the New Zealand bowlers used bounce and angle to worry the India batsmen.

Boult took the first wicket of the day, bowling around the wicket and from wide on the crease to dismiss Ajinkya Rahane (29), who played inside the line and edged to wicketkeeper B.J. Watling.

Southee dismissed Hanuma Vihari, who didn't add to his overnight score of 15. In a brilliantly-laid trap, Southee enticed Vihari with two outswingers before bowling an inswinger which ducked back past the inside edge.

Ravi Ashwin also fell to Southee, trapped lbw by a fuller, straighter ball which might have been missing leg. Ashwin walked and didn't consider reviewing the decision.

Ishant Sharma made 12, hitting a boundary which took India into the lead and meant New Zealand had to bat again. He also received an lbw decision with equanimity, falling to de Grandhomme.

Southee and Boult combined to dismiss Rihabh Pant — Boult taking a good catch from Southee's bowling — and Southee completed his five-wicket bag with the dismissal of Jasprit Bumrah for 0.

"Day one it was probably the toss that turned out to be very important," Kohli said. "But as a batting unit we take a lot of pride in being competitive and we were just not competitive enough."