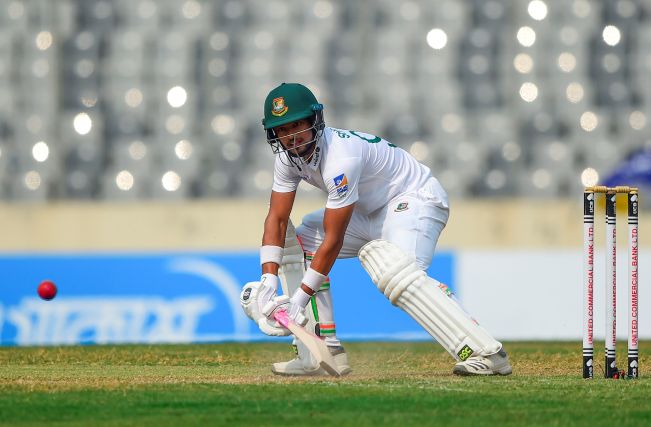 Nazmul Hossain Shanto struck his maiden half-century as Bangladesh reached 120-2 at tea on the second day of the lone Test against Zimbabwe at Sher-e-Bangla National Cricket Stadium on Sunday.

At the second interval of the day, Shanto was batting on 55 with skipper Mominul Haque on 17.

Bangladesh however is still trailing by 145 runs of Zimbabwe who was bowled out for 265 in its first innings in the morning session of day two.

After bowling out Zimbabwe, Bangladesh made a shaky start to their innings, having lost opener Saif Hasan cheaply for 8.

Saif indicated a good day for him with a picture-perfect straight drive but was tamed by a Victor Nyachu-delivery.

Tamim Iqbal and Shanto added 78-run for the second wickets stand in rapid fashion before Donald Tiripano got the better of the former.

Tamim struck seven fours in his 89 ball-41. But before being dismissed, he completed 13000 runs in International cricket across the format.

Shanto remained unfazed and completed his half-century, punching a fuller delivery of Sikandar Raza through mid-off for a single.

He so far played 112 balls and hit seven fours in his knock in which he looked utterly in control.