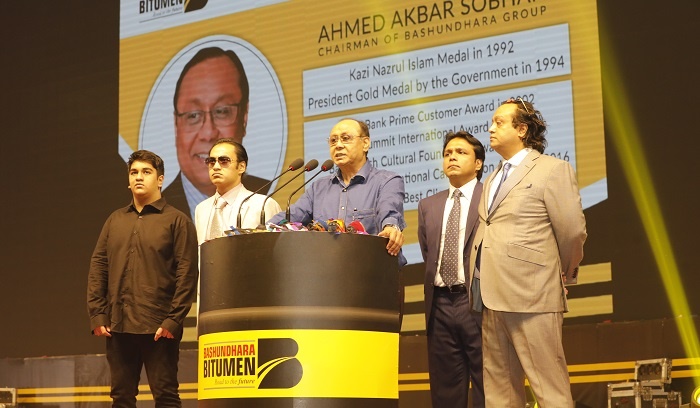 Bashundhara Group has planned to establish a cricket academy which will be named after Sheikh Russel, the youngest child of Father of the Nation Bangabandhu Sheikh Mujibur Rahman. Bashundhara Group Chairman Ahmed Akbar Sobhan announced it in the launching ceremony of the country's first-ever private sector bitumen manufacturing plant ‘Bashundhara Bitumen Plant’ at Pangaon in Keraniganj on Saturday.

“We are building a sports complex which is named Bashundhara Sports Complex. We will also establish a cricket academy named after Sheikh Russel which will train a huge number of cricketers,” Bashundhara Group Chairman Ahmed Akbar Sobhan said.

“Prime Minister Sheikh Hasina is encouraging patronisation of sports in a meeting of REHAB (Real Estate and Housing Association of Bangladesh). She told us to provide support to sporting activities. Sheikh Hasina has played a vital role in developing Bangladesh’s football. Bangladesh has now reached a new high in cricket. 99 percent of the credit for accomplishment goes to Sheikh Hasina,” he added.

Bashundhara Group Chairman also praised the manner in which Prime Minister took it on her shoulders to improve the state of cricket in the country.

“She always inspires cricketers and knows each of them personally. She talks with them over phone and via SMS. Bangladesh emerged champions in the ICC Under-19 World Cup recently courtesy of her inspiration. Hopefully, these youngsters will one day clinch ICC World Cup for Bangladesh. Cricket is branding Bangladesh internationally; it uplifts the image of Bangladesh, it uplifts the image of Prime Minister Sheikh Hasina,” told Ahmed Akbar Sobhan.

“We are going to celebrate the birth centenary of Bangabandhu Sheikh Mujibur Rahman. I was with Sheikh Kamal in Bangladesh Chhatra League (BCL). Unfortunately, he is no more. My elder brother was the captain of Abahani. Sheikh Kamal had a deep love for sport, I have never seen such love for sports in any other human except Sheikh Hasina. We are now building a sports complex and then we will also establish a cricket academy named after Sheikh Russel. Our Managing Director Anvir has been the President of Sheikh Russel Krira Chakra for five years and my younger child has been the President of Lt Sheikh Jamal Dhanmondi Club for the last four years. Hopefully, we will train a huge number of cricketers in Sheikh Russel Cricket Academy,” Sobhan further said.

Meanwhile, Bashundhara Group, the leading business conglomerate of the country, has over 20 major concerns located in different areas of the country. It covers diverse activities involving the production of cement, paper and pulp, tissue paper, LPG bottling and distribution, Energy, and a trading company, among others.

The group under its new concern Bashundhara Oil and Gas Company Ltd has built the 'Bashundhara Bitumen Plant' at Pangaon in Keraniganj. Bitumen is a binding organic material made from the by-products of refined crude oil. It is widely used in road construction as it is easy to produce, reusable, non-toxic, and a strong binder.