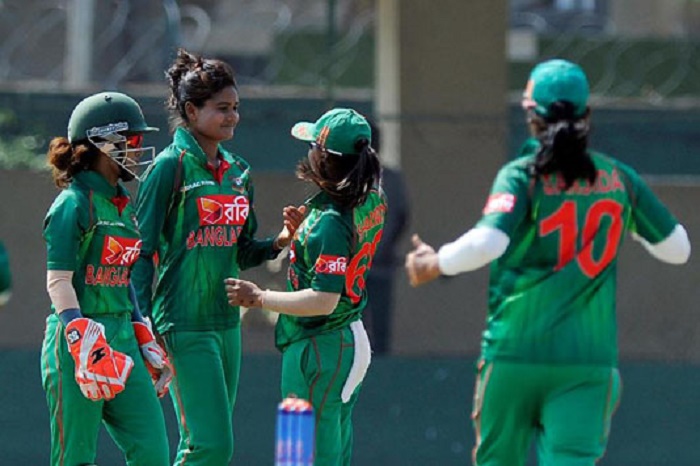 Emboldened by the success of the Under-19 team, Bangladesh women team is set to kick-off their ICC Women’s Twenty20 World Cup mission by taking on mighty India on Monday at Perth, Australia.

The match starts at 5 PM as per Bangladesh Standard Time.

The Under-19 team has recently won the World Cup, beating India by three wickets at Potchefstroom in South Africa, what Bangladesh women’s captain Salma Khatun said would act as an inspiration for them.

“Our men’s U19 team showed what was possible when you combine determination, talent and hard work, and they are a massive inspiration for us ahead of this World Cup,” Salma said ahead of their first match against India.

“We are very proud of them and what they were able to do in South Africa but now we are looking to what we can do in Australia.”

Salma Khatun said Bangladesh are looking to reach the semi-finals for the first time, even though they are yet to win any match in this tournament in the previous two editions.

They are also drawn in a tough Group A that sees them face Australia, India, New Zealand and Sri Lanka. Bangladesh however did never face off Australia and New Zealand in the International cricket.

Still Bangladesh’s confidence stemmed from their performance in the warm- up game in which they beat Pakistan by five runs before their first practice game against Thailand was rained off without a ball being bowled.

In a bid to end their win draught in this tournament, Bangladesh took a long preparation this time, which included a conditioning camp in Australia’s tourism hub Gold Coast.

The Tigress reached Gold Coast on February 3 and played two practice matches against a local club where they won one game while the other match was washed out due to rain.

“We are very, very excited. The whole team is looking forward to the event as this is a massive stage and an opportunity for us to show that we can play some quality cricket,” Salma said.

“Since the last World Cup, there is more belief in our team. We have beaten some top teams and sides that are ranked above us in the past two years, there is a nice blend of experience and fresh talent. The core group has stayed together and that experience could prove vital.”

Salma emphasized on to keep the process right and play an aggressive brand of cricket in a bid to fight neck-to-neck with the top teams.

“If we can be competitive, aggressive and play without inhibition then we should have moments where we can get ourselves in advantageous positions. If we get our processes right then the result will take care of itself. Hard fight and competition until the very last ball – that’s all I ask of my team,” she remarked.

Salma also drew the inspiration from the Asia Cup 2018, in which they became champions, beating India twice-in group phase and final.

“We have some of the top teams in the world in our group. But when you come to a tournament like this, you cannot think in terms of good and weak opponents. We won the Asia Cup in 2018 by believing in ourselves against all odds. We need to have the same mentality in the World Cup also,” she added.

“We came to Australia early to get acclimatised to the conditions which are alien to us. Only a couple of our players have some prior experience of Australia. We have had a camp in Gold Coast and now heading into the tournament, these are exciting times for us and everyone is motivated and confident.”