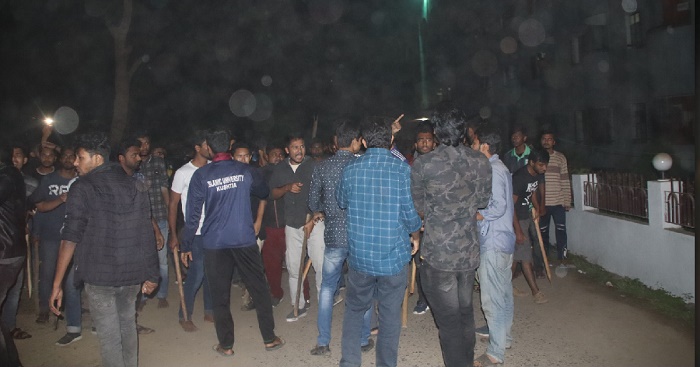 At least eight activists of Bangladesh Chhatra League’s (BCL) Islamic University unit were injured in a factional clash on the campus in Kushtia on Saturday night.

One of them, Himel Chakma, a student of accounting and information systems, was critically injured.

Students said there had been a longstanding dispute between former BCL leaders Faisal Siddiqi Arafat and Shahjalal Islam Shohag over establishing supremacy on the campus.

Kamal Hossain, a second-year student and supporter of Arafat, and Jebiyar Rahman, an MA student loyal to Shohag, got into an altercation at Shaheed Ziaur Rahman Hall around 9pm.

Later, supporters of the two groups swooped on each other with sticks, hammers and sharp weapons in front of the hall’s mosque, leaving eight activists of both groups injured.

They also vandalised the room of Kamal at Ziaur Rahman Hall.

Some students took the injured to IU Medical Centre for treatment. Himel was shifted to Kushtia Sadar Hospital as his condition deteriorated.

When contacted, Kamal said, “I mistook Jebiyar for a friend.  I apologised for the mistake but he physically assaulted me.”

But Jibiyar rejected the allegation and accused Kamal and his group of beating him up.

IU Proctor Professor Paresh Chandra Barman said they went to the spot after being informed about the matter. “Legal action will be taken against the accused after investigation,” he said.