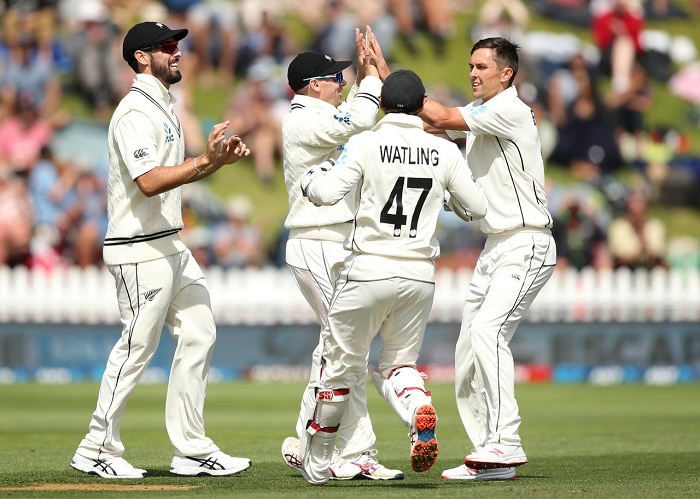 Mayak Agarwal stood alone with a half-century as India lost two early wickets in their quest to wipe out a 183-run deficit against New Zealand in the first Test in Wellington on Sunday.

At tea on day three they were 78 for two with Agarwal on 52.

The opener twice escaped trouble early in his innings when he played uppishly towards the three catchers stationed in front of the batsman on the off-side.

But he has since been well-controlled and brought up his third Test half- century turning Ajaz Patel to the fine-leg boundary as India slowly clawed their way back into the match.

Cheteshwar Pujara was bowled by Trent Boult for 11 on the last ball before the interval.

He had only just started scoring freely after facing 28 dot balls and receiving loud applause when he ended the drought with a two off Boult.

The promising Prithvi Shaw, in his first Test since serving an eight-month doping ban, was the first wicket to fall as he had been in the first innings.

On 14 he turned a Boult inswinger and was caught by a diving Tom Latham at backward square leg.

It was a questionable shot at a time when India needed patience after letting Kyle Jamieson mount a rearguard assault which gave New Zealand a comfortable first innings lead.

Jamieson, only selected for his maiden Test while Neil Wagner is on paternity leave, has been the headline performer for New Zealand.

He followed up taking four for 39 with an entertaining 44 off 45 deliveries with the bat when the New Zealand innings was teetering.

From being 225 for seven, New Zealand were eventually all out for 348 with Trent Boult adding a rollicking 38 off 24 balls while Colin de Grandhomme contributed 43 at a more sedate pace.

Jamieson, who blasted four sixes in his whirlwind knock and was caught going for a fifth, put on 71 with de Grandhomme for the eighth wicket.

Ishant Sharma was the most successful of the Indian bowlers with five for 68 while Ravi Ashwin took three for 99.