Must think of resolving global problems for unity: Ex-Indian FS 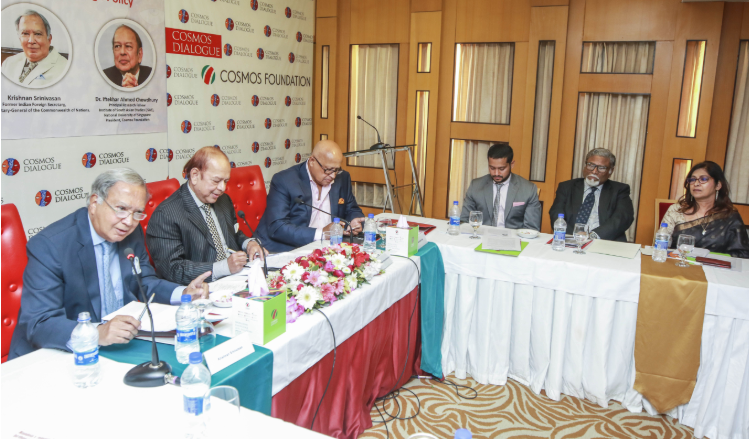 Former Indian Foreign Secretary and renowned scholar Krishnan Srinivasan on Saturday laid emphasis on resolving the global problems arising from conflicting values that can divide rather than unite humanity.

“We must think of resolving problems,” he said adding that they need a new universalism, a shared principle of common humanity that will somehow allow them to prioritise universal and international interests over “parochial national interest” that actually divide instead of unity.

Delivering a lecture on “Values, or Their Absence, in Foreign Policy” organised by Cosmos Foundation, the philanthropic arm of Cosmos Group, as part of Cosmos Dialogue’s Distinguished Speaker’s Lecture Series, he said there is a universal tension between values and interests.

The prominent author and former Deputy Secretary-General of the Commonwealth of Nations said they live increasingly in a globalised world and described how intractable problems are confronting humanity, irrespective of border.

“We should seek congruous between different value systems to forge a harmonious world based on common factors -- tolerance, equal rights and equal opportunities,” said the former Indian diplomat.

He, however, mentioned about some difficulties noting that societies cherish different views that make the prospect unrealistic and unattainable for the time being.

In exceptional cases, Srinivasan said, values are so deeply held that promoting them becomes a national interest.

He said they, sometime, find that values, ethical or moral principles, ideologies are usually not central to the foreign policy. “This we need to understand.”

Srinivasan said values are principles or standards of behaviour by which good and bad, right and wrong might be assessed.

Values of course can vary depending on generation, class, education origin, tradition and they provide the motivation to influence the outcomes both in the minds of people and governments, he said.

“Although some values are shared across cultures, there’s the contrast of values in different societies that account for many of the misunderstanding and misperception among countries,” said the Indian scholar.

Highlighting domestic values and its practice, he discussed situation in the USA, India and the UK with focus on secularism, equal rights, social harmony and the rule of law.

He said values influence foreign policy, especially when a country is strong enough to project power or influence.

The former diplomat said soft powers can only sustain values up to a point and one nation’s values are meaningful only when they are recognised as such by others.

Srinivasan said a successful foreign policy cannot be implemented without being supported by values.

He mentioned that values which are in only one country’s interest could potentially jeopardize its relationship with other countries which do not respect those interests.

“It’s important for us to recognise that values can lead either to agreement or to discord with other countries,” Srinivasan said.

He said it is true that all nations generally pursue the same basic goals – the welfare and security of their populations, and protection of their national borders.

But, he added, languages, political cultures, social customs might differ and create obstacles to cooperation and welfare efforts might get lost.

Essentially, Srinivasan said, the real drivers of foreign policy tend to be the advancements of economic or strategic advantage.

Enayetullah Khan said today, they are witnessing, if not a decline of the West, but certainly a rise of the East, with Asian powers playing an increasingly critical role.

“The values they practise, therefore, have gained considerable international salience. So, what set of values determine current global politics: Western? Eastern? Or are the interactions between the two producing a universal consensus?” he questioned.

In recent times, Khan said, they have been experiencing a rise of ‘populism’ in different parts of the world.

“This development is tending to exacerbate the differences between ‘us’ and ‘them’. This seems to be gathering momentum in a wide range of otherwise dissimilar countries. Sometimes they espouse their unique values and ideologies as well,” he said.

But, Khan said, unfortunately, these can be threatening to global stability and social order. “This phenomenon merits observation and study with a view to addressing them in a positive manner, so as to manage their negative effects.”