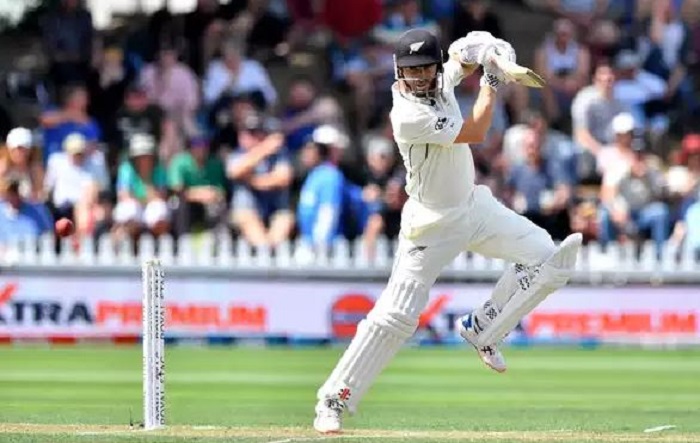 After a forgettable batting performance in a little over two-and-half sessions across two days, India were further stretched by Kane Williamson, who made his way to an undefeated 46 at the Tea break.

Williamson's effort, in combination with Tom Blundell's brief but solid stay, helped New Zealand to 116 for 2 - just 49 short of India's 165.

India began the day with the chance to rebuild after an abysmal Day 1 where they lost half their side even before they got to 100 runs. But miscommunication between Ajinkya Rahane and Rishabh Pant led to the latter's wicket, and made India susceptible to a lower-order collapse. On cue, Ravichandran Ashwin fell for a first-ball duck - to an exceptional late outswinger from Tim Southee - while Rahane's dismissal four short of a fifty hastened India's end. Mohammed Shami threw his bat around for a 20-ball 21, but India ended up losing five wickets for 43 runs on the second morning.

Though Tom Blundell and Tom Latham saw New Zealand through to Lunch without any damage, Ishant Sharma's around the wicket tactic against the left-handers - one he's used for a while now - brought an early breakthrough in the second session. Yet it came in an unlikely fashion as Tom Latham ended up edging one angled into his legs, to Rishabh Pant, while attempting to steer it down to fine leg. Kane Williamson was welcomed with a short ball that clearly caught him by surprise, as the ball ballooned up off Williamson's glove. The New Zealand captain appeared to carry the sting from that blow for a while, but was comforted by the easing conditions as he and Tom Blundell settled in to forge a big partnership.

Indian pacers resorted to a lot of short-pitched bowling, which made life easier for Blundell and Williamson as there wasn't enough on the Day 2 pitch. For majority of the second session, New Zealand held the upper hand courtesy the duo, as they kept gnawing at the deficit. But Ishant Sharma, who was the only pacer who seemed like troubling the batsmen with his line and length, returned for a new spell and struck straight away. And unsurprisingly it was a much fuller ball that did the trick, swinging in late and breaching Tom Blundell's defence to send him packing for 30.

Ross Taylor walked out to a rousing reception from the volumous Wellington crowd as he walked out to bat in his 100th Test appearance. He threw caution to the winds straight away, slog sweeping Ravichandran Ashwin for a six. Ashwin, who was getting the odd ball to turn sharply off the rough, was soon taken off by Kohli, cutting out Taylor's attacking options.

Bumrah came back and kept a lid on the scoring, but continued to struggle to find the right line and length to bowl which made it easier for the two batsmen to deal with him. Williamson appeared in a zone similar to Ajinkya Rahane, where he just didn't look troubled by any of the bowlers. It helped that India bowled to his strengths of staying back in the crease and scoring runs off the backfoot. He and Taylor added 43 undefeated runs in quick time heading towards the Tea break, putting New Zealand in complete command of the proceedings.